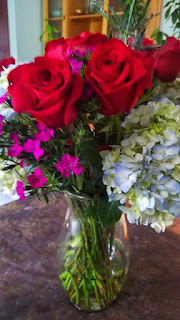 As I write about prehistoric stages, monsters, and research galaxies that the space Hubble has viewed—and scientists declared. I realized something about a particular person that’s been in my life nearly fifty years. The thought—'I know you don’t read my shit.’—crossed my mind.

Yeah, sounds crass but its true. They’re self-involved even when I’ve acquiesced them ten times over, listening to their lives’ situations—then desired an opinion from them.

My youngest daughter asked one night, “Mom why do you guys talk so loud?”

I replied, “Sorry Honey. But I’m trying to bring her back to earth to stay on subject.”

That was four months ago. After that—I decided I’m done trying too hard with this relationship—like I always have.

The other day—I had a disastrous run. Actually, in an event. I despise disastrous events—but they happen. They can happen in training, in the kitchen, at work, in competition—practically anywhere else you could imagine in life. You just pray they don’t happen at critical times. Or are limited in their damage—at the very least managed well psychologically—even if the physical damage is great. Well, I got that going for me.

We battle things every day. Every day is a struggle—the little struggles of the day create the struggle of everyday life. There are big struggles that we are born with—by the way it’s all relative. Although, when it came to me personally I never thought it was—until a handful of years ago. My attitude was ‘be damned if I don’t do—what I say I’m going to do regardless of the circumstances’. Yes, regardless. I know sounds too tough. But that’s how I always got things done.

My response, “No. I’m great.” Then forty minutes later with my belly button reaching posterior to touch my spine—I’d driven to a drive-thru ice cream shop and order a medium to large strawberry ice cream shake—dying from starvation burning calories from my pre-training ten mile or so run and two hours of his training before I headed off the work and or family obligations.

Near twenty years prior—A doctor I worked for asked,

“You always respond by raising the bar? Like—How high, Sir!”

I commented, “Hmmm, I do?” He smiled and nodded.

Quite often, relativity was for other people. Yet, for me it was a cop-out—an excuse to do less. Or to do it wrong—to not care. Not viewing everything I do as some sort of teamwork for the living. And respect for the dead. Its is Carpe Diem! No matter how bad it feels or you feel. Your job, your existence is pertinent to the ideology of helping the world. To provide a better living for those with you and those after you. That is no matter the relativity in your life. Yes, there are pauses. Those that are not emergencies should be announced. Emergencies are regarded. Even if you’re not.

There arrives a point in your life where you no longer argue the unarguable. You just smile and or nod, agree. I think for someone like me it’s easier than it is for most people. I look back to my childhood—everywhere I turned I knew I had no opinion. Or that it wouldn’t be regarded. My mother would privately throw a thought my way as child. She wanted my opinion. I was cautious and brief.

Other than that, as I’d become an adult—I realized that my own blood disregarded me. To the far reaching beyond 2nd and 3rd cousins I was ill-regarded if at all. I can say it is how it felt and still does. That has not evaporated overtime, even though I’ve had nothing to do with practically anyone from my blood family for now nearly two decades.

Oddly enough, I’d not done anything sinister, nor been a drug addict, neither an alcoholic, nor smoked. I was the good child. The caring child—when the adults weren’t caring for their spouse, their cousin, their sibling, their child that was now an adult. They ran the other way, and I stayed as a child with their child, a parent. They’d abandoned her. They disregarded her as they would me. But mostly for different reasons.

She, it was because she was mistreated by them, and she was quite ill. Me, it was because I knew the truths. I also took charge as a child, didn’t complain, didn’t call on her relations even in the most desperate times. Times most children could have, might have reached out to a nearby relative. Instead, I remained loyal, patient, empathetic and quiet. I was the vault.

I could have easily gone to live in New York with my Godmother. She would have welcomed it. For her and my uncle were unable to have children of their own. And I’d sensed they liked being around me.

I disregarded any importance my life may have held. I was more interested in eventually being of service to others. That too, was detested by many of my blood relatives. As even my dad had commented twenty-five years ago. “Someone that good, makes me want to throw-up.” That was my problem.

Looking back, I never passed a snide remark to anyone I was related to about why they wouldn’t acknowledge anything good about me. Any accomplishment was dashed to the ground and trampled on or completely ignored. Nothing, no part of my existence was ever good enough. I couldn’t mention a passion. If I had been tantalized by their asking. They’d see my eagerness and then stamp out their question—as if they’d never asked anything about my existence.

One day about nine years ago I’d just accomplished something that no one I know, had or has. I have been considered a freak of nature by some. Or just a freak by others. I embrace that. My fight coach Phil was holding pads for me. No one else was in the gym. I queried him, knowing he’d be straight up with me.

“Why do people hate—when there is nothing to hate? Like you always do your job. Like you have cared. You’re doing your best? What’s that about? It’s followed me all my life. It sucks.”

He nodded, “You know what your problem is?”

“Those people wanted you to give up. They expected you to fold. To breakdown and cry.”

“The problem is you’re not doing what they would do. Instead, you put on your big girl pants, dust yourself off and act as though you are unaffected.”