Who's Your Bank Teller? 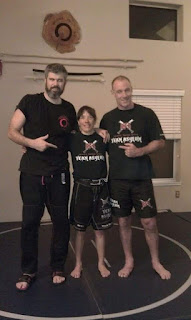 Who's Your Bank Teller?

So after I finished my work day today I head off to the bank before heading home for family dinner. Too, more training and Norm Reicher’s selection of “Back to the Future” for family movie night. I never told him I didn’t like it...but it was a movie for him and the children... so it worked for me.

As I pull into the strip center area where the bank is, my brain reminisces about a time in June 2012 in Phil Dunlap’s basement on a Thursday morning, where Killer Ken was late and no one else showed. I had Phil all to myself.

As this thought flies through my head and I pull into the Bank drive-thru, there is the young man I’ve seen clean cut, gentle-manly type, with a tie on. His name is Eric. And for the last five to six months he's been my teller most times. I parked at the drive-thru to make a transaction. I smiled. No one else was around, and it’s 6:46pm Friday night.

I began, “Eric, I just had a thought float through my head.”

I looked around, not wanting to hold any other customers up. He smiled.

I comnent, “If I could I got to tell you this story...I got this coach. His name is Phil. And well one day before he moved to Vegas, we were in his basement fighting. I’ll explain.”

I responded, “Yeah. How did you know?”

He commented, “I trained there a little bit in his basement.”

I then began to realize he had looked familiar all the time, just couldn’t place the face. We had five guys there named Eric at Phil's basement fight gym.

“Well then, I've got this story...You ever see Phil fight with one of the guys?”

"Well this is the story that is stuck in my head... So after a 20 minute warm-up on pads, Phil asks, 'You want to move?' I respond my usual, 'Yeah, sure.' I know he’ll put it to me. But it’ll just toughen me up and in the end I’ll know my flaws.

As usual (some people are shocked when we move) he’s got the upper hand and can find my flaws and I’ll see them. He’ll warn me not to do something and if I don’t fix it, he’ll (whack) remind me. Fairly to remind me. I tolerate much so some may not appreciate what I’ll tolerate. Also most people who don’t know how Phil or I operate.

Basically, part of who I am as a fighter is I tolerate strikes to get to my opponent. Most people don’t understand that.

Gabe a pro-Boxer has watched me a couple times and said, 'You fight like Joe Frazier. Taking five shots to give one good one. Hard way to fight.'

I had a doctor friend say that to me. Others have commented, 'You figure you’ll wear down their fists with your face.' Phil knows where my weaknesses are and we’ll work on them. But we know what my strengths are and so we strengthen them.

So as time passes this one Thursday in June, I try and shove Phil against the cage and control his then 178 pound body so I can knee him and hopefully get a punch off. As I attempt to knee him, Phil is lifting his leg up and striking my calves with his heels. It’s not a happy feeling.

As this is occurring Killer Ken Yaeger walks in. He hears me growling and snarling because I know I just made a huge mistake. Phil and I are still non-stop. I’m mad at myself. Killer Ken asks, 'Is that anger I hear?' I respond trying to hold my position (next to impossible, I mean really.)

Eric smiled, “I remember those days in the basement.”

“So what’s your last name?”

I think I knew him all along.---Jody-Lynn Reicher