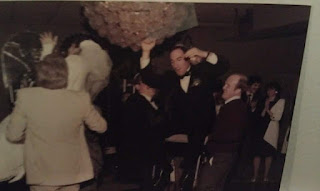 Today would have been, Our 38th Wedding anniversary...

We met at about 11:30pm Tuesday August 11th 1981 in the United Parcel Service (UPS) Yard, Saddle Brook, NJ at the unloading docks. I took care of the outside docks on the midnight shift. I made sure the trailers were lifted just enough so the packages to get unloaded.

My husband told me three years later that the trailers weren't the only things that were rising because of me. My response, “Yeah, right.” I had twenty docks to handle on the midnight shift. I worked this job at UPS during my off-duty time.

I saw this guy in charge of four of the unloading docks, he was a manager. I really wasn't looking for a guy or any relationship. I already had my mind set what I was to do with my life. Yet, I thought...'He seems handsome. He's clean shaven. He looks intelligent, looks hard-working, and he dresses well for the job. Looks like a guy with a real brain. Yep, that's a turn on. Ahhh. But, he'll never be interested in me.' More to that story. But that night I was thinking all that about him, we hit it off. I made a bad joke after I crawled underneath a trailer to get a package that had fallen from a trailer, I was covered in grease from the trailer hydraulics, handed him the package intact.

Fast forward to 3:45am Saturday, August 22nd, 1981. It's our third date. The beach. I was off duty and I had injured my back. I now could stand up straight with the help of codeine and acetaminophen. I despised drugs as well back then. So, I decided after feeling loopy for a day. I had enough. However, the stuff was powerful. I was still a little loopy, even though my last dose was twelve hours before. He, the new date guy, Norman had just gotten off from work and we'd decided to have our third date down at the beach. I was staying with my Mom and little sister for the time being.

Norman pulls up in front of the house. My Mom knew who I was going with and where to and when, etc... Even though I was well on my own, being in the Marines, having already helped my Mom pay some of the mortgage at seventeen and later other financial obligations. I still checked in with her.

I saw Norman's car a 1980 Chevy Malibu Wagon, a standard. A rarity even back then, parked. I quietly left the house and got to the car. I get in. He asks, “You got everything?” I respond, “Yeah, I think so.” Then I pause, “Uh my pocketbook. I got to get it. It's in the living room.” Norman responds, “Oh I'll get it for you. You look a little out of it.” I reply, “That's okay. I know exactly where it is. I 'll be right back.” As I get out of the car, I think to myself, 'this guy is really digging me. Too funny.'

I decide I feel good enough to try and hurry, so I go into what I think is a calm jog up our walkway. All of a sudden I realize I feel like I'm flying. Then I realize I am. Yes, I fly into the air, totally forgetting there are three stairs I have to step up to get to the porch and then front door. I trip over...ehhh hmmm. Fly over the stairs, kind of like Superman, but short-lived. I land face and chest (what little I have) down on the porch. The top of my head misses the screen door by about four inches. I now figure I just killed the plan 'B' for life I had not planned on. So, Oh well... I start to laugh hysterically, expecting to hear car wheels squealing away. Thinking, 'Norman would not want this disaster in his life. And to 'Escape now while it's still safe.'

Instead, at the same time as I'm laughing so hard and uncontrollably, My mother opens the main door and Norman gets to the porch to see if I'm okay. He thinks I'm crying. As this happens my mother says, “What are you doing down there?” I respond, “Getting my pocketbook.” I laugh even harder. ---Jody-Lynn Reicher

PS: May 6th Thursday is what would be our 38th Anniversary. Happy Anniversary Norman in Heaven