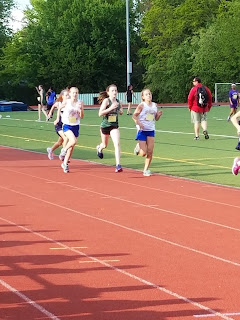 When my youngest lamented that third place didn’t mean all that much to her. That she expected a better performance from herself to gain more points for her track team. I then thought back to this time in my life during a high school track meet. I remarked to her, “You have no clue. Third place means a ton in athletics. And in track and field, yes it’s only one point. But a team can win by one point. Yes, even in track and field, it can happen.”

In the spring of 1977, we were about to have our last dual high school track meet. And just days before I sprained both ankles, my left ankle was the worst of the two. Our Athletic Trainer was my cross-country coach. He really didn’t think I should race my event, the two mile. I expressed, “ …but we are going against Old Tappan!” He knew what that meant. Old Tappan was our sister school, as well as the team we would always want to beat. Heavy duty rivals we were. He shook his head and taped both of my swollen, yellow ankles. I told him I was fine. He watched that practice. I would not let on to how rigid my lower leg into my feet were feeling. I was determined to run my race in a couple days. I was determined to gain points for our girl’s high school track team to win over our rival. We were considered the underdog.

Before we knew it, we were in the midst of perhaps what I can recall as one of the highlights of my athletic life. Funnier yet, no one would think that; considering all the other athletic events (about 700) I’ve done since 1971, spanning nearly five decades of competition in athletics.

As some may know that there is a sequence to when each track event is performed. The Intermediate 400 meter hurdles are in the first two events, usually. The one mile race is usually the fourth event, the 800 meter is about sixth of the events. The two mile is the second to last event of the track meet. And the Four by 400 meter Relay is the last and final event.  Simultaneously, the pole vault, all the jumps, the shot put, discus and finally the javelin are done in various areas of the field while all the track events are occurring. And usually, those field events are done before the final track event begins.

So, here we were in the spring of 1977. Our Head Coach was shaking his head. For he had just solidified a decision in who to put as running the anchor leg in the Four by 400 meter Relay. It was our top 100 meter sprinter.  Who was indeed fast.  From what I recollect, she’d never done this event.  If anyone wanted to win against our rival as much as all of us on the team did, it was our Head Coach and his Assistant. I could see him sweating. He was always a happy, goofy guy. This time however, I witnessed him stressing.

He asked me if I was okay. I replied, “Fine.” He felt I’d be lucky if I even placed. He didn’t tell me how many points we had.  Most of the field events were already over, when I lined up for the two mile race. I knew all of Old Tappan’s two milers were studs.  But I decided, I would just go for it.  I would fight every angle where they’d try to pass me. I’d run harder, pressing the pace when they thought they could pass me. They were breathing down my neck for seven and half laps of the eight lap event. I knew I probably wouldn’t get first place. But I would fight for every inch, every point I could get.

With 200 meters to go, the first girl began to make headway in passing me. Finally, by 100 meters she passed me with what appeared some ease.  The second girl began to pass me. With forty meters to go she now had second place.  All I had left was to fight for third place. Third place in track and field is usually one point earned for your team. I held on to the finish and achieved third place. I ran 13:11.6, tying my then personal best.

Now came the relay. The gun went off. All our teammates were in the stands. We were screaming out of our minds. We had just heard that we could win the meet, but we needed to win this final event. And word had it, our team had never won against Old Tappan. As well, we did know that going into the meet. Time passed quickly as the relay teams raced with what seemed such insanity from their teammates in the bleachers, screaming, shouting, cringing and so forth.

Then it happened. Our 100 meter champion got the baton and took off. I almost didn’t want to watch. But then, it was like she had after-burners on the bottoms of her feet. As if she was shooting flames from her heels. The slow pace of waiting for that great moment of speed arrived. The moment felt forever. And the only thing I have been able to recall from that last event of that day, was our relay team bringing home the win, by one point.---Jody-Lynn Reicher