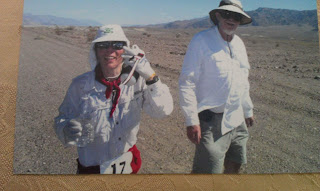 So Jim, Steve and hubby Norm Reicher are crewing me in 2005 across Death Valley.  It's about 125 to 128 degrees.  A man from France is racing just ahead, He's got like aluminum foil on his head.  I cannot laugh and run, I'll fall over.  Meanwhile his crew is ehhh hmmm, putting on a eh cough....show.  He has two rather good looking female crew members and a guy who looks like a brunette Fabio.  You know the guy who did the ad for " I can't believe it's not butter".   Oh and Fabio has no shirt on and a one girl ...eek...barely dressed.  Like bathing suit top on  ( no pool in sight); the other short shorts on.  But the one thing I'm fixated on is passing this French  guy who reminds me of  'Jiffy Pop Popcorn'.  It's stuck in my head.  I eventually pass him.  135 miles later, I finish.  Dr. Jim Manning Norm(Hubby) and Steve Papp are wiped.  Forty hours of crewing for me in the heat of the desert mostly no shade.  So Steve says "I'll drive back to our hotel."  It is a slow 20 mph drive for about 13 miles into Lone Pine.  It's dark out  As Steve drives down the side of Mount Whitney, Jim and Norm are in the back seats of our white rented minivan. I'm in the front with  Steve.  Suddenly we see a crew vehicle , we wonder who's coming up next with three miles or so to go.  Everything is distorted due to the lights. There are more crew vehicles.  Eventually we think we see...Jim and Norm  yell, "It's him!!!! It's Mr. POTATO-HEAD!!!  Steve starts to laugh.  Norm and Jim are hysterics laughing in the back seats.  I see it, and say, "No, that's the Jiffy Pop Man .   Jim says, "Norm wanted to run up to him and ask him if he was a  baked potato and offer him butter or sour cream."  With  that we all lose it to the point, where thank God Steve was driving, the three of us were laughing so hard we were useless, Never mind wired from staying up all day and night and the heat of the desert in mid July.---Jody-Lynn Reicher