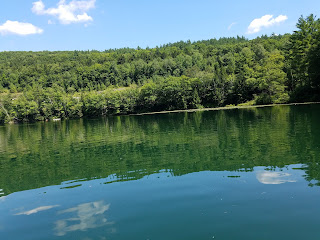 When did I start getting disgusted? This morning after reading about Kinzinger's regret about voting not to impeach the former 45th POTUS on the Ukraine issue in 2019. I began to look back, far back to my childhood. As when did I begin to feel disgusted about human's behaviors.

Was it the first time my mom said, "Don't stare." ? Because I wondered how someone else with disabilities got through their day? Could I help them? I know I wanted to. Even back then, I couldn't handle watching others suffer and be discarded from the rest of society.

At age seven. I was on an anti-litter campaign.  I remember it well. I made a big poster to put inside a window of our town's 7-11's store window. I absolutely despised litter. Still do.

Next was, why would someone bully someone else? Made no sense to me. And by age eight, I'd take them down too.  And I did on some occasions.  Yes, physically.  All I could muster. Neither lost, nor did I ever get in trouble for it. I guess between my size, being a small girl who didn't say much knowing never to complain.  Could've been that those bullies mostly boys had it coming, and many felt such as well.

Unlike anyone in my Catholic family, I read the Bible. It was the only thing I could read and comprehend. I read it so much, that by age eleven I was thoroughly disgusted with how religions claimed they were, 'The Better'. I witnessed the hypocrisy of Christianity. All are blasphemous.

Meanwhile, they freely condemned their neighbors because of a slight difference in  religion.  I heard it all by then. And announced such to my parents in our kitchen, one late afternoon at age ten.
By age thirteen, I found most Jewish kids were nicer than Christian kids.  I found that people of color had big hearts, lots of love. As a matter of fact, more love that I'd seen from my own.

By age fifteen, I found people from the Far East to be reserved, yet they weren't 'stick in the muds'. They were hardworking. As those children seeing their parents learn English and working more, quite often than their American-ized counterparts.  As well, as Americans arriving here more than 100 years ago. The ones not enslaved,  mind you.
Every day I hoped so much for humanity.  To the point, as my mother's health was ever more compromised by her family, her husband and the medical field.  I remained so steadfast in my hope and faith, that my mother blurted out, when I  was age eleven.
It was as we walked home from church on a chilled,  rainy Sunday, "I should've named you 'Hope'.. Because that's what you give."
All the while in the midst of my being harassed nearly daily by the kids in town, I remained outwardly upbeat. Yet I hoped that my 'not fighting back' 99% of the time for those first three years in a new school/town, that those children would understand that my lack of fighting back was my compassion and understanding of them. I hoped they'd become better older teenagers, perhaps better adults.

As the years passed there were practically daily reminders in my life that people hadn't changed.  That they hadn't yet evolved much past the mentality of our domesticated and some wild animals. Sad but true.
Finally, hope may run dry too. The more I study, the more I work, the more I contemplate, pray.  The more I realize humans are only a tad different than our wild animals in nature, in their actions/words.

It appears everyone wants to be correct. This has always been this way... arrogance has always been part of human nature.
Over the past few years, as Americans were becoming more openly 'woke'.... as they say nowadays.  The old guard who, some hold close to their hearts and minds the bigotries of the Confederacy.  Yes,  statues of the bigoted should be reduced to rubble. If not, then freedom has lost. True equality has been dashed to a trillion pieces.  Then there is no way out of our wars. Wars that shouldn't be.

The good debates are gone. And truths are skewed into lies. And still, even the most educated people believe the most moronic things.  The conspiracies,  that are orchestrated by the greedy, the hateful, the unwilling.  And those people, educated and otherwise believe it all, because they want to. Because they think they are genetically superior. And if that is not a case of bigotry,  I don't know what is.
The bottom line is, people need to step back or step off before my hope is restored for humanity. Both sides need to give a little more. Serve, the underserved... Not the undeserving yet with compassion.  Learn to love the things you don't understand. Read more. Read differently.  Read from sources you wouldn't listen to or read from. Try and then do.---Jody-Lynn Reicher