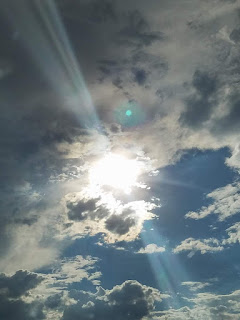 Someone listened to me today...

I don't mean that as a feeling of sadness. Quite to the contrary. It was that they liked my silly humor and my stories. We barely know each other, mostly by sight over the past ten years.

Only about two months ago did we know each other's names. We would sporadically see each other at her place of employment.  And I wondered if our chats helped her day along. She told me that they have, as she expressed such today.She is five years my senior.

As we chatted,  we both reckoned with the fact that when we were growing up in the 1960s and 1970s,  boys were the more cherished. We nodded in agreement to that fact today.

However,  we aren't visibly now in that position. As she mostly manages in the store that employs her. As well, of my 36 year marriage ending with my husband's passing in 2020, that which in 15 of those years I earned more than he.  Not something ever heard of in my ancestry. Both her and I are mothers. As well, she a wife. Married about as long as my husband and I were.

It appears as much as we came from different upbringings, as we found out today. Yet, we still had to contend with being considered the lesser gender.

Fathers in my day would complain, 'a girl costs money' because it was traditional for the bride's parents to foot the wedding bill. However, my husband and I broke the glass together.

Yes, He stepped on the glass under the huppah to help finish our wedding vows that day, nearly 38 years ago. When many who were having interfaith marriages with a Rabbi and a Priest or Minister. We went with a solo ceremony with a Conservative Rabbi. Also, not so traditional for a Catholic girl. And trust me, there was backlash. I lost my best friend over getting married out of my faith. Yes, that was a sign of the times.

However, the two of us split the wedding bill with his parents.  My mother had no money, struggling working three jobs, whilst embattled with a few illnesses, while parenting her third living child of elementary school age.  My dad whom most thought had no funds, perhaps holding tight to long pockets and short arms, contributed barely anything. It was a wonder that I was even valued that much.

Girls in my family were at the very least undervalued.  And many I know were abused for generations.  I truly get it. Many people think they understand where I come from. But I say few do. And thank God for that. Because many don't make it out in one piece. And some don't make it out alive.

So my contribution is to let the world know that freedom cannot arrive when others are oppressed. My contribution, is to acknowledge what we have, and who doesn't have what we have. It is to shame those women, who now will not come forward. It is shame those women, who dare to douse a spark of a flame of those girls and women wanting to be something,  As much as I forgive, I do keep score. As we should.---Jody-Lynn Reicher