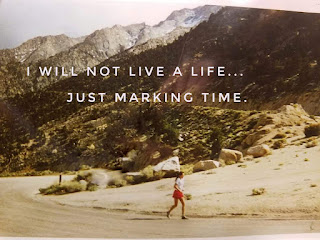 What it Takes...
Written in 2018...
Early this morning, before our oldest left for work she overheard my husband and I speaking. It was about a record I still hold and another one I didn’t realize I set that same day nearly thirteen years ago. She wanted to know what it took to set such records in running. I didn’t go into the injuries I’d incurred. Neither the demons one fights, whilst in the process of attempting to set records. Yet, I went into the amount of time and money that it took. The sacrifices. The commitments, to EVERYTHING.

Time. The time on your feet.  The time you sacrifice not going out to a movie, nor to eat out. The time you don’t have to sacrifice.  All that time while working full time.  Then add in raising children, as well as wanting to be there for most of your children’s ballet, karate and other organized activities. Then the time you should and do spend taking the children to playdates, the zoos, the farms, the playgrounds, the fishing excursions. I explained giving up sleep.  Banking on three to five hours of sleep many nights. All while working full-time, raising and being there for two children and husband, cleaning your own home, and running ninety to two hundred and thirty miles a week. I ran that amount for the better part of twenty-six years.

The other reality of time was that also my husband had to roll with it, when I insisted on cooking meals instead of going out. Many nights as I ran through some nights a week, my husband didn’t have a warm body there the whole entire night laying next to him. I’d rise either at midnight or come in from a run at midnight. Or rise at two in the morning and be back by eight in morning to take our daughters to ballet. And in order for us to have couples’ time, after the children were in bed by eight. I would lounge with my husband for three hours watching movies and talking with him. I didn’t do lunches, once a year I had coffee with somebody if it wasn’t business oriented.

And Ohhhhh the MONEY. You have to have money to travel. Unless, you do what I did. That is save up the money and do a few events. Train alone ninety-five percent of the time. Train in every format of weather, because it’s all you can afford. Running apparel, with the exception of sneakers. I don’t usually buy running apparel. I wear ripped up “t’s” layered under old sweatshirts that have seen better days. I didn’t and won’t buy top of the line anything. Sometimes I’ve lucked out won a grant for a few thousand dollars.  Yet, also I did many charity events which helped motivate my intentions.
Also, I sent running stores customers, and the people who valued that I did that, who owned those stores would give me top of the line jackets, sneakers and sunglasses. I bartered for energy bars. I bribed people to run with me with a barter. I’d give them a free session of bodywork for an hour if they would run forty miles with me before-hand.
I tried paying twenty dollars to this woman once to run ten miles with me at the end of a sixty mile run in a park. She wouldn’t take it. She’d ran ten and the extra ten miles for twenty bucks wasn’t worth it to her.

I learned to Be flexible, and NOT to think. Work more and later to compensate for the dollars spent and to not miss the children’s waking hours. Some days I would work from three in the afternoon till midnight in my office. Some days I’d work eight to two, so I could see the children before and after school; then go back into the office working six in the evening till eleven at night.  Yet I knew I had been there for breakfast, some lunches and many dinners (even if I couldn’t eat it all).

In the end, although incurring damage here and there. I have a healthier life. I have a fuller life. I’ve witnessed incredible things of nature, beyond many a being’s belief. I’ve had the ability to think fully alone. I’ve become better at trouble-shooting problems on the run for work and family. And I’ve had my share of meeting up with the proverbial and sometimes real ‘Big Bad Wolf’ on some runs.  Yet, I survived when most would not have, I’m sure. I concluded to our oldest that I was one of the lucky POOR runners to set a record.  Because there are those that have set stupendous records, yet, they have the money.  They have less commitments embedded in their lives perhaps by choice.
I told her as did my husband, that it’s all the choices we make. It’s about balance. And to set a record. To live that life, is not always a balanced one. Something is given up. Something is sacrificed. You just have to forge ahead and be grateful that you had the opportunities to make such attempts at setting records.---Jody-Lynn Reicher..