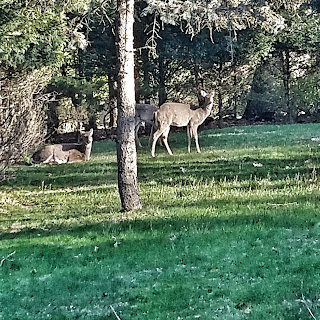 There are many suggesting and actually driving the world; primarily the people in it to becoming virtual. Virtual by means of intangible, less feeling. I’m speaking not just spiritually, yet the physical as well. Prior to the pandemic, depending on where you were I noticed there was less handshaking upon meeting others. I guess perhaps I would be one of the few sensitive to these things on an extreme level. Which could be due to, that for twenty-eight years as I was in the hands-on-people business. I noticed people either became less trusting or more demanding or both.

Perhaps I’ll explain how this goes with handshakes upon meeting, eventually.

It could be a city effect.  In which I do not feel a connection to. I feel more of a connection to the earth, its unheard inhabitants, the plants. The quietness of a field, the silence of a forest. A cricket, the crackling of leaves under nature’s footfalls, or a fallen branch. Actually, it is what I seemingly have always longed for. By my history, you wouldn’t think that.

The history of my athletics, military service, certain jobs I’ve had and so forth.  I truly do not enjoy crowds or get-togethers of any kind; except after a fight or a grappling match, perhaps. Mostly, I have felt okay with that. Yet beforehand, I want no part of it. I don’t want to be around anyone.  Even and especially before running events, including solo charity events that I’ve organized, recruited for and ran.

However, what I’m witnessing currently, is that people are starving. Starving to not be virtual. They need to be hugged. I had that experience yesterday as I shoveled snow for a few hours. A stranger was driving by and saw me shoveling. At first, I didn’t know what made her stop. It was the sight of one of the fourteen deer of the herd in my side yard that could be seen from the roadway.

It is a phenomena, that I am blessed with nearly every day at some point. And more recently, since my husband passed, its been every day practically. More fox sightings as well. And yes, I do talk to the deer. I do this, because I share their space. Yes, I’ve paid for the land and pay taxes regularly on it too. But you see, I understand I’m renting it from them. We, they and I are not virtual to each other. We are partners in nature.

So, when I ask the younger deer to not eat certain shrubs, yet point them to the ones they can eat. They do actually obey me. And their elders, understand this with me. Although, I haven’t mastered everything. The thing I know is what I’ve allowed them to do. The young ones have to learn, and I understand this. So, my tolerance is understanding.

So here I was yesterday, the deer attracted this woman. Whom was about my age, maybe a year older than I. She backed up her car, “You know you have a deer in your yard?” I stopped shoveling and replied, “I have a herd that lives on and near my yard.” I saw eleven deer today. But there’s fourteen deer in all. There are three bucks, one is the king.” She appeared stunned at first. Then she asked, “Hey, do you need help in shoveling your snow?”  I replied, “No. I’m mostly done. And it’s a great workout too. Right now, it’s replacing lifting weights. Just got done with my training run. So, this is good for me. Thank you.”

She nearly insisted. We didn’t know each other. We talked about the deer for a spell. I found out who she knew on my block, five doors down and where she lived about a mile away. She told me her name. We were conversing so long I had her back up and put her car in a better parking position.  Then the conversation got deeper than deer. I saw tears in her eyes. She needed a hug. We found out that we both had been in the healthcare industry and now were done. I told her I was fried. She was told she was fried, and they let her go. Too much stress. I saw it on her. In her expression. She asked, “Can I give you a hug?” She started to cry. I acquiesced. One thing I do when someone hugs me, or I them. I feel for the spirit. Where is the desperation? Where will this hug go? How long will it last after we embrace? Is anybody home? Yes, those are the thoughts in my mind whenever I hug or shake hands with someone. And I don’t forget those thoughts, those feelings I receive in the silence of a hug or a handshake. I reflect upon them. Because it truly is the tangibility of the human spirit at that moment. There’s some truth in a hug. And you find out if somebody is home.---Jody-Lynn Reicher