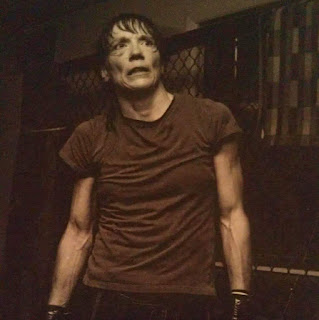 I must be in a sing song period of my life... So, here goes. That song by Blood, Sweat, and Tears, "And When I Die", rang through my head this morning.  Oddly I thought,  'when was the last time I listened to that CD of theirs with that song on it?' About six weeks ago, I remembered.  I was shadow-boxing in a room where I'd just ripped up the carpeting from.  It covered the floor for over a decade.
The carpet, for over the past seven years had wrestling mats over most of it. It was in the main area of the basement. Yes, before we allowed our oldest to commandeer that part of the basement over two years ago for privacy.  It had been a wrestling basement.  A few of my old teammates from the Asylum Fight Gym would come over and roll with me and each other.  We would coach each other on my basement floor. Usually Saturday mornings and sometimes I'd throw in a Wednesday night at nine o'clock, after work and after I tucked the kids in.
It's funny, we never hurt each other, neither did anything in the basement get damaged. Except our youngest's Lincoln Log Barn she had built in 2013. Oh yeah, Peter and Tom knocked near it once. A little piece came off. Peter quickly paused being in Tom's guard. Peter keeping Tom at bay with top pressure, reached up and fixed the approximate two by one inch Lincoln Log on the Barn. This, as Tom attempted to sweep Peter to gain top position. Peter a  well-balanced individual fought MMA in Japan years before. I believe it was in a bar. I'm still shaking my head. Yes, many MMA fights professional and amateurs are fought in bars. Yes, sanctioned by the state/country. And no kidding, hockey arenas too.
My husband of thirty years at the time was cool with us wrestling in our basement. Peter was my main wrestling/grappling training partner for nearly eight years. All six foot four inches and 189lbs of him. Norm would meet the guys before they began the training each time in our basement.  Sometimes our daughters would come down and watch. Sometimes he did.  Our youngest was the most enthused.
She would see two to four people wrestling at a time. Or one person coaching the two people who were wrestling/grappling together. That was more the usual. If I had a fight coming up, we'd work ground and pound with four ounce gloves. Two people wrestling/grappling on the ground with element of allowing punches hard to the body, legs, arms, but we would refrain from whacking the guys in the head though. This way, especially if they had jobs like teaching they wouldn't look beat up. As well, less of a liability.
Oh, the comments from our youngest at times had us laughing as we wrestled/grappled. Then we'd commandeer her to video sections of the training to send to our old coach at the time living 2,000 miles away in Las Vegas for further coaching and critiquing.
The basement wrestling/grappling was phased out as schedules changed. I found a welcoming Boxing Gym in 2016. I was totally digging it too. Yet, I missed the ground work, the training. By March 2019 I signed up for BJJ with gi training.  I'd not worn a gi for any form of ground work ever. I was and probably still am what my coach Phil Dunlap calls "Raw". My husband used to kid around and call me "Cavewoman". "Raw" and "Cavewoman" have the same inferences. And it is who I am and how I think. I start with the basics, always. And quite often I retract back to them for a reset, especially before a New Year.---Jody-Lynn Reicher