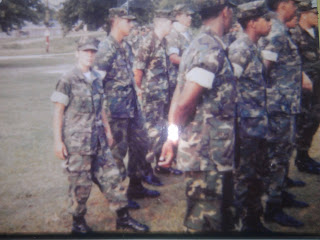 Today’s date may or may not be a day of infamy. However, it is for me. It is a day that marks a number of things in my life. It was two on this date thirty-eight years ago. One was a world event. Another was quite personal. Both were intertwined on that day.

It was October 23rd, 1983, as I awoke at about four in the morning. I had stayed over my fiancé parent’s home, for he was to drive me to a wait station on an army fort near the Verrazano Narrows Bridge. It was to be my first marathon. Which I was ill prepared for. It was because I’d just recovered from the flu seven days before. As well, three days before that I received my marathon acceptance letter. Yet, I so wanted to be a marathon runner.

My nervousness started as I realized I may not even be accepted six weeks prior. What was worse, was that the people who I thought might be happy for me to be accepted into the 1983 New York City Marathon, weren’t. They said all sorts of negative horrible things to me, when they saw I was down about not yet being accepted. Imagine that. People who were and some who had been long distance runners were telling me marathoning was a ‘dumb move’ for me.  As well, relatives and relatives to be commented that it was ridiculous for a girl like me to try and run the marathon.

And I found out, it was that the director and coaches wanted to promote someone else in marathoning from the team that I ran for. It was their college educated sweetheart(s). Not some kid like me, from a broken home, with barely any college and just finishing up my time in the Marines. Yeah, they didn’t like that. And for the life of me I couldn’t put my finger on it all, till years later.

Just merely a minute or so after I awoke on that morning, I arrived in my soon to be in-law’s kitchen. My husband to be, Norman had a news station on, WINS. It has been known as 1010WINS. “You give us twenty minutes. We’ll give you, the world.” He heard me enter the kitchen as he was making coffee. “Um. Something terrible just happened. And you may not want to run the marathon today.”

Astonished, “What?” I inquired. He replied, “I think 235 US Marines were just killed in Beirut.” My heart sunk. I could not run. I responded, “I can’t run.” I could not be so selfish as to run. I wondered, ‘Did someone need me? Was I about to be called up?’ The timing seemingly couldn’t have been worse. Then a moment later Norman followed up with, “Run it for them. The ones who now can’t.” I queried, “Really? Is that right to do that?” He nodded an emphatic ‘yes’. Then I realized he was correct.  I got motivated.

As out of shape as I was from the flu and having a vacation right before that, which I ran barely miles three weeks prior. And was only at a thirty to forty mile a week running regiment. I thought, ‘Who am I kidding?’ But I had this opportunity.  The one thing I knew and know, is that when someone like me gets an opportunity I must seize it. For if I do not, I will regret it.

I’ve summarized I was never a looker. Never talented. Never too smart. Definitely too honest. Frankly, I was always a nobody and knew it. I was a number. A cog in the wheel. Yet, the one thing I had going for me, was that I would always be considered the underdog.  And that was motivating. Because I knew if I accomplished something, that others thought they couldn’t. Then they could do it too. So, I was the hope for those who knew their ordinariness. And if I accomplished this, it would awaken the other potential underdogs in the world. That’s the world I lived in. Do your best all the time and with such intention and no one will notice. But you’ll know it was right. And at the end of the day, you have to live with you.

That morning thirty-eight years ago, although prayerful, heavy-hearted, filled with doubt and some fear I was brought to the New York City Marathon waiting area. My future husband hugged and kissed me, then drove off to meet me later at the finish line. By the time I’d gotten to the starting line, I’d made some friends from other countries. They were experienced marathoners doing the marathon for various charities. The gun went off. We ran together. Along the way I met more people from all over the world. The man and his wife from Scotland who I’d met at the starting area were back running with me at around mile thirteen. It had a party feeling to it, in a sense.

Although I did encounter hitting the wall at about twenty-two miles, I knew to keep running no matter how my pace would slow. Before I knew it, I got to the finish line. As I did, I heard Norman call out my name from somewhere in the crowd. I walked and prayed. Till I neared to where his last name’s letter in the alphabet was, like we had planned. We embraced across the line. “I’m so proud of you.” He chirped. “Someday, I’m going to do this.” He added. And he did. Not once but six times. He never thought he could run a marathon till that day when he saw me finish my first one. Six years later, he raced and completed his first marathon. I found out later, when back on duty that two of the US Marines killed in Beirut were originally from my unit.---Jody-Lynn Reicher