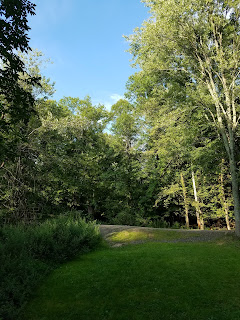 Last night during our torrential and tumultuous storm here in New Jersey. I heard the rain increase suddenly, seemingly tenfold in between eight and eleven. There were odd knocks and crashes heard just outside my front door. I kept peering out to see if there was damage. I saw nothing. I went downstairs to the basement, and everything was fine. No water was prevalent. It was peaceful in the basement.

My oldest was fast asleep by ten or earlier and my youngest was chatting with a friend on her phone. I watched the rest of a foreign web series. Our bunnies weren’t in distress. They usually sound a thumping alarm, if they think something is awry. Our little guinea pig was calm too.

This morning, I awoke later than I expected. For I knew it was the last night before the night before school restarted for my youngest. And days before my oldest was to set out onward on a new adventure beginning as a freshman in college. Neither had work early this morning, I knew I didn’t have to wake them. As usual I’d get chores and perhaps some morning writing done before going for a run. But that was halted.

I have routines. Yet if I hear our bunnies knocking, I know to tend to them. This morning, I hustled to them after doing morning stretches in bed. As I approached my routines, I provided clean litter boxes for them with fresh hay. I then had to retrieve something from the basement. In the process, entering our basement I came upon a flood.  Yes, our basement flooded after ten last night. I had checked it multiple times during the storm.

‘How?’ I thought to myself. Yet realizing there was no sense in any form of distress on my part. I called out to our oldest then youngest. “You guys. We got a flood in the basement, and I have to move things. Let’s do this.” Then I texted our neighbor Michelle. Wanting to have the walls checked. To see what her and her husband’s opinion were.  And if there was any damage, other than the rug and how fast I could get the inch of water up. The water lay on our full finished basement, rugged and all.

Michelle was over in thirty minutes with an extra wet-vac as we were pulling things out from the basement.  We laid them to dry out on our deck. I began the first wash of any items that had been sitting in the water. I knew it’d be a long day. However, somewhere in the interim of the first hour I stood still in front of our kitchen sink washing my hands, looking out the window. The sun shone intensely, as the beginning of all Septembers I can ever remember of my nearly sixty years here. I paused.

In my pause, I breathed in that succulent, crisp, early, autumn breeze that wisped through the ajar kitchen window. “It’s a Beautiful Day.” I reminded myself that these are the days I enjoy after a jarring hot summer.  I suffer well through, loving every moment of the intense heat and humidity of the area in which I live, has to hold. It’s the contrast I live for. It’s the extreme that toughens my resolve. That too, I live for.

It is not that it is not often that I say out loud to my soul, “It’s a Beautiful Day.” Or something to that effect. It is in the most intense back breaking, soul-raking times I recognize the beauty of a day, when catastrophe has happened in my life. As a matter of course. “Isn’t it a Beautiful Day?” Rolled off my tongue thirty years ago this past August. Then I was sitting in the passenger side front seat of a detective's vehicle.  My husband in the back seat, as we pulled out of the police station headed for another station. Well, it was going to be a long day.

Only about three hours in the hospital and they couldn't figure out the collateral damage to my body, because they were so disgusted by rape. And the attack and abduction so vicious, that I shouldn’t have been alive. But here I was. They just let me lump there pretending to do no harm. So, I demanded my freedom to get real work done. The detective and my husband were with me on this.

Instead of telling them how horrible I felt, or how concussive I knew I was. I never lost consciousness, and that was good enough for me. So, I looked outward and upward, and it was a beautiful day. A top ten in weather, for most people’s liking. The two men were stunned to my pause and near query of, “Isn’t it a Beautiful Day?” I heard them both scoff, to my then spoken words. The detective turned to my husband and said, “Get a load of her.”  They both shook their heads. --- Jody-Lynn Reicher