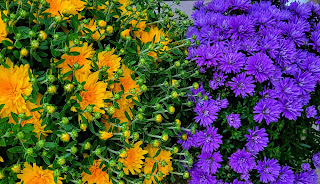 To this day I still look over my shoulder. There's a few reasons for that.  The first one goes back to middle school.  Mr. Tannenbaum's homeroom. Well, that's all it took to make me afraid of being taunted or assaulted from behind.

Many of you reading this,  have no clue of the impact of trauma. Stop! This is not about sympathy. You see, it's where you were before that trauma. The trauma that was the 300th trauma or that about, from kid's doing and teachers witnessing, and not stopping what those kids did to you on school grounds.

I'll give you an example or two.  It goes back to before this 'gum in hair' incident in between homeroom and class changing occurred.  Which was the trauma after the lunch homeroom break trauma occurred where someone slipped what supposedly was in essence fake drugs into my pencil case. That I had opened in front of Mr. Tannenbaum, his assistant, and the kids in my front row seating.  That was just three minutes prior to the next trauma.

So, here I was, the kid with a sick mother,  an aloof father and about to become a big sister all at the same time. Yes, Mom was ill leading up to another pregnancy.  Only this one, at least her ninth pregnancy... well it worked. So, I was caught off guard within my contented self for some moments. Mom, only had three of those pregnancies make it into adulthood.

It mostly started after we had moved on October 15th from a much bigger, blue collar town.  The beginning of the taunting at least every school day,, from October 24th, 1973 till I graduated in June of 1976, from that godless small village school in a well-to-do town. A town where most were quite loaded.

A town of tennis Mom's, fake Catholics,  spoiled children, perhaps neglected children, and teachers so fearing the parents, that they allowed much atrocious behavior. As long as it wasn't the high tax bracketed children getting bullied, it was okay.  Especially,  if your Mom didn't socialize and your Dad was considered the town ditch digger.  Yes, I was a ditch digger's daughter.

But I digress, to bringing the readers here into a feeling that has never left me.  I am way not soft skinned. If I think something is wrong I speak up. I do what I must to do the right thing or rectify a circumstance that I'm aware of.

I have narc'd on people.  Yep. Took my life into my own hands.  I was indeed threatened.  I knew I was in danger. Yet I reported. Then one time I was given permission to ehhh hmmm watch for 'the deal'. Being put on weekend duty, reluctantly by my CO. Being told frankly, that if anything went wrong,  he couldn't back me. I promised him I knew what I was doing.   Yep, I was eighteen and I knew what I was doing and why.

Gets better. In the same month,  I ended up having to report a fellow Marine for attempting to get me into what I thought was his car on an empty base roadway. I went straight to the MPs who grilled me mercilessly.

At the end of the week, I found out my reporting may have cost the guy to be finally tossed out of the Marines.  Why? Because he'd stolen the car that I reported him in, from another Marine who's car it was. By the way, the MPs knew that at the time before I reported my encounter with the car thief. As the theft was reported before I entered the fray. And the guy was already on the hot-seat for other criminal acts.

Add on that 'on the base drug dealer' who invaded my apartment on base? Threatened me, if I were to report the deal going down with my superior (she way outranked me) roommate who ran it with him just outside our apartment government issue doorway.

Yeah, I got them in a delivery during the guard duty I'd requested. It was midday on a sunny Sunday on base right where I was guarding.  I reported the details the next morning to my CO. Three nights later I was moved out of the apartment a few doors down into another apartment.  As I was awoken in the night with threats of how I would be raped. Yep.

Funny, how I know dangers.  I understand dangers tremendously. The bad feelings from middle school years remained. So, I worked with them. No, they aren't a blessing. More of a scar.. They took away time, confidence (which I already had little of). It took away my being comfortable in being social, being at school, trusting teachers. Which I still champion them.

Any trust I could have had in humans, is practically non-existent. As I have become forced to accept that horrible feeling I get, at any place my back is to anyone. Humans, that is.  You name it. I feel it. Planes, movie theaters,  auditoriums, restaurants...

My husband did not understand my demands when my not wanting to go to a concert. Or why I want a certain table to the side or back of restaurant,  where no one sits behind us and I can see the exit signs ahead.

One would perhaps think, 'What would move me, to put faith in anything human? Why would I care? After reporting things and being unsupported and ridiculed. Would I do it again?' Yes I would. Hold my toilet paper and my Verde CD.---Jody-Lynn Reicher