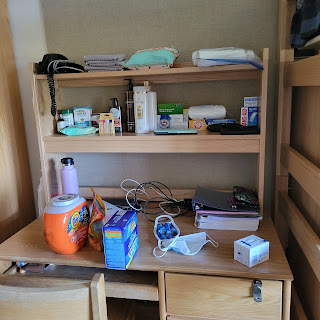 There are many experiences that parents can have in common.  Well, that is if. A big 'if', if your child doesn't go to a trade school, doesn't go into the military, doesn't decide to do either, nor college, yet works full time. Everyone has a different journey.  It is perhaps all upto each individual. And each individual's situation.

My experience as a child is by far a dichotomy to that of my husband's,  and now our oldest child. As a parent, there has been no one who I know personally, who will exact my experience with moving their child into a college dorm as a freshman.

I hear dramatic scenes, told by parents or their children on how their experiences were. In having been moved or moving their child into college dorm rooms. It appears that others seem that they are less pragmatic and more emotional in their experiences in being the mother in these circumstances. So that is from a mother's point of view. So I've heard.

Today, my old UltraRunning coach expressed his mother who's now in her mid 90's, balled her eyes out upon his departure. That was in his first year of living away from home and in a college dorm.

So today, as my finishing touches matched the demands of our oldest daughter's needs that occurred.  I acquiesced her without a hitch in my stride. Nor a questionable hiccup in my responses to her new living quarter needs for her college dorm living experiences.

Yesterday was her official move in day. It was incredibly crowded. I decided, since it was only her and I doing the moving in. As well it would probably entail 2-3 trips uphill at nearly three-quarters of a mile, carrying luggage and other needs for her. We could wait hours to get a cart, to wait more to get the cart filled, checked in and then delivered. However,  it would be two times that because we would need two big laundry carts loaded up, tagged, recorded, loaded in, the truck to deliver each cart, then unloaded, then we had to decipher with a ticket the cart that was hers.

So I made her a deal.  I knew I could easily carry stuff uphill multiple times to her dorm complex.  I'm still in professional athletic shape. So, I explained the timing and logistics to her. She would do no more than one trip up. I would handle everything else.

The first trip up was about six pieces of luggage. We carried three each.  She had two full backpacks stuffed to the gills, and a wheeled medium sized piece of luggage. I had an oversized piece of luggage, double the size of a medium sized luggage.  And I carried two bags. I set my GPS to gage foot direction and a time frame to give us, to keep her motivated. I knew for me it would be easy. For her, conversely quite wearing.

If we moved quickly uphill, it would take approximately thirteen minutes. Yes, that was the tease. Like, "See. It's that doable." And under my breathe... '...for someone who's ran across the Mohave Desert a few times in the middle of the summer, with heat over 120 degrees for 135 miles, no shade in forty plus hours. Piece of cake.'

As we made the crowded, sunny, warm trek uphill. I rewarded her with a thirty second rest in the shade with four minutes to go. She took it willingly.  Then we restarted and got to her dorm complex minutes later.  Before entering she had to get her room card and pass code.  So I stood outside the complex as she stood in line to retrieve all said.

Then an hour later we arrived in her room.  I left her and now practically ran back downhill to the underground parking garage. Which on a side note, to save us time and not jam up the parking area for unloading, I parked in the long term underground parking lot.  Since I was the one making the returning trips, 'So what was a few additional yards of walking anyway?'

After mentally measuring what was left to bring to her room.  This time I would stand in line for a cart.  And this time, the line was 80% smaller than it was just before our trek to her dorm complex.  I received a cart in 20 minutes. I ran back with it to my long term parking area and my space. What I had left, fit perfectly without an inch of room to spare in the cart.

I then ran the cart now filled, to the line for it to be registered, and loaded into the back of the truck. I received the ticket noting the cart and ran out and uphill to my daughter's dorm complex. I got there in eight minutes, having to be crossed and get through hordes of people being respectful as I passed them by.

After I got to the outdoor area before the dorms, a bunch of us waiting for our carts, I kidded around with a few parents. Making jokes about,  'After this we will have to memorize every single number on each delivery truck that arrives. There will be a pop-up quiz later tonight. And who needs a bottle of wine?' Making some laugh, another mother chimed in with her humor and we had her husband laughing as well. She was quick with quips that were funny and made time roll by quickly as we waited.

About thirty minutes later the truck carrying my cart arrived. It was the first one off. I showed my ticket, got my cart and scurried to the elevator.  Soon I was at my daughters three person dorm room door.

She had nearly everything unpacked and set up. She was tired. So I rearranged her closet. I unloaded the cart in her room. Before I had arrived, one of her roommates and their Mom helped my daughter put the mattress cover and fitted sheet onto her upper bunk bed. Thank God. 😊

Soon, after pictures and meeting a few of the other freshman students on her floor who befriended her, while I was gone. At this point, she was 95% moved in, knowing, I'd return the next day with some other essentials we hadn't bought yet.

At the end of all this, she has remained as pragmatic as I appeared. Her roommate wondered today, on how Sarah was hyperfocused on pinning her pictures of family,  pets and friends at her bunk area, while she didn't attempt to hop down to give me a final hug. I explained to her roommate. "We did all that yesterday.  Today, was more of a last minute pop-in." Her roommate understood.

I also know being the mother of this daughter, versus our youngest, not to pressure her. Let her go and Let her be.  It's her whole new world. I will stand back and out of the way and let it unfold for her.---Jody-Lynn Reicher