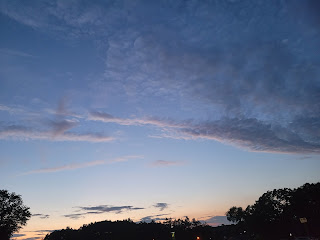 When I was age seven or so, I started this hard-core praying thing.  You see, I knew the world needed help. Well, actually I knew my parents were in trouble. So, at night I'd run a video tape in my head (it was a movie film in my day 1969 when this film started to play in my head at night.).

So, I wanted a few things. I wanted to be close to God, like King David.  I wanted squishy teddy bears/stuffed animals, I wanted to write,  i wanted to be a soldier, and I wanted to save the world.  Not like with super powers, because I knew that wasn't true. But with fortitude,  dedication, courage and toughness. That's what I prayed for.

So, here I lay in bed and grabbing one of our many squishy stuffed animals my now deceased husband and I have collected since 1982. I realized I had not a void. Yes, things aren't perfect.  The world recently appears to be spinning off its axis. Okay, yeah that'd be. I'm a science geek, I know what's going on. I was in the Marines,  I know what's going on. There's trouble around the outskirts of my realm, I get it.  Sigh. Trust me I know trouble.  I know death... met him once too many times...successfully fought him off...to live, of course.

Sigh again.  But the world just doesn't get it.  I realize this, because as I lay facing one of our little stuffed animals in our bed, now half empty. I hold its fuzziness,  because right now caring for another living thing, when surely I have enough with two children,  and three small pets (two of the pets have been misbehaving...don't get me started). Well, I can't complain. I've accomplished a few things.

You see those weren't my only prayers. And I have a strange feeling many prayers have been answered as I lay in bed with multiple squishy stuffed animals and pillows,  something I never thought I'd experience as a kid. Not even in my wildest dreams.

So, now I have those prayed for squishy stuffed animals,  I am a writer, I'm probably closer to God than I even know,  I had my time in the Marines, but I haven't been able to save the world.  Yet I realize, the world needs to save itself with responsibility from each individual,  one at a time. It's everyone's personal journey as we argue, judge,  get ruffled making issue out of nothing,  complain, nothing is enough. Yet we are abundant,  most just haven't recognized it yet.

If we could only recognize our own abundance every second of each day, maybe the people wouldn't spin wildly out of control off their axis. Maybe, just for a day we'd be Grateful.  Like be kind to each other Grateful.  That's how we rescue the world. Don't hate because you have to win. How about forgiving each opposing person's idiosyncrasies?  What about that? It takes less energy to remain calm in forgiveness than it does grumbled in jealousy,  judgement and hatred.  Be careful what you wish for, maybe for a day it just might happen.---Jody-Lynn Reicher