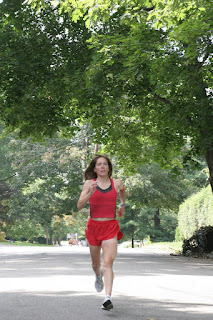 After attempting to see if my legs... well if I would become successful in getting my running legs back or better than what they've been since 30 years ago, when my spine, and mainly right side took damage. Damage the medical field misdiagnosed for 18 months. With a question, "What if I overcame my damage.? The nerve damage." I've dreamt I could.  I thought anyone would think such thoughts would be insane.

But I don't ever believe anyone should put limits on themselves.  Bad enough many people have desired to put limits on others, because of their ignorance and their own inequities.  No one on this God's earth truly knows what any one individual is capable of.

In speaking with my old UltraRunning coach, Dante over the past few weeks, he sees something.  Something I wondered about for the past fifteen years.  I contemplated such thoughts of burnout.  Then I realized, if I could use my running for staying in shape for another athletic career... and then if I felt the urge to come back to the sport of running, I would try.

The late Dr. Jim Manning and I in the past spoke of "Miles in the Bank".  The debate was, how is it applicable? To what extent? What about past damage? Can we fix that? Also, I wondered just as I envisioned my fights if I had more time,  perhaps. However,  with running it was, 'How much would I be able to take my banked miles for their benefits if I were to run less in training in the future?"

So as my late husband would dub me, "The Good Little German", I applied a variety of different approaches to my running.  Only now, I have changed four areas,  slowly. I decided to be only obsessed with getting outside and running every day.  Not the speed, not the distance per se. In doing just that... running a speed I normally would feel in a 20 mile training run in decades past... I didn't feel I was running that hard.  As well, I got faster at the Eighth mile and held it till the last two miles today, last Saturday was twenty degrees cooler... I never felt the effort that day. As well, I had a tempo run two days ago inbetween both 20 milers. The only time I felt the 20 mile effort was about 90 minutes after I'd finished.

Something did change. The recovery I had, and my even pacing, as well my ability to go faster in the second half.

We will see how getting legs back better all works out. You don't know unless you try.---Jody-Lynn Reicher