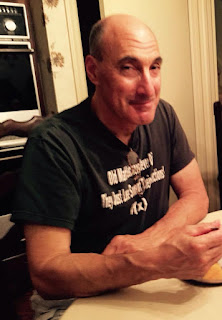 As we arrive to the completion of the first year without Norman, I had decided long before he'd passed that I would continue to do things certain things he liked yet could no longer do. I decided I would not take a day off of fitness.  I would run at least for 500 days in a row. I began that in early 2020.  I'd not be concerned with the distance I'd run. It was the very thing I convinced Norman and the thing that mattered to him, from the very first discussion we had August 11th, 1981, was fitness. I loved that he was a College Boy. He loved that I was a Marine. We tickled each other's soul with such admirations.

Later fitness continued as an old discussion from 1994 ...getting outside and to run no matter what. I would say to him, "Run 200 meters, then 400 meters. If it doesn't feel good, stop. Turn around and walk back home and know you did your best. That is all you can ask of yourself." I said this,  knowing he would get down on himself if he was not in shape, or for some reason hadn't completed a mile of running for a day or two.

When it comes to death, it is not usually  beautiful to the living.  I can say the last we (my daughters and I) saw of Norman soon after he passed was his smile.  And amazingly enough he evidently pulled himself into a seated position.  His eyes marginally open, as if looking towards a future. He had plastered on his face a look of hope and joy. Something I'd never seen, nor expected from any body vacated from this earthly life, passed into the eternal spirit, of which as Albert Einstein would say... was the void which is God.

The parenthesis we the living here on earth is quick. It is fragile. It is fleeting. And most people,  approximately 93% of us still cannot wrap our minds around our expiration of our own existence.  Most forget we are mortal.

The paths we seek, the turns we allow to lead us to something either more spectacular than we could imagine. Or, they take us to something perhaps less desirable.  Depending on who you are, it may seem clearly an uncertain next journey.

So, July 19th, 2020 at approximately 4:48am, I heard silence from a body five feet from me. He wrestled that night just a few hours before.  Yet, he was not in distress, nor in pain. He was giving orders, having discussions from 11:37pm till about 1:32am. Then after setting my alarm for 3:35am to check on any need he may have for a syringe of pain medication, it never rang. I slept through the alarm or someone turned it off.  He hadn't been able to get up since about 2:30pm on July 18th. I knew this.

I awoke at 4:48am. As I lay there at 4:48am for two minutes. I whispered,  "God he's gone, isn't he?" Silence answered back at 4:50am, "Yes". I knew. I knew the suffering was over for him. The morning sun began its rise as I approached his now vacated humanness. I touched his cold left hand, as he was held up now by it with the sudden onset of rigor mortis. Yet, the essence of joy and hope I felt, which presented on his face. It even remained two days later in the casket at the funeral home, as there is no embalming in his Faith.

So here we are, sometimes unable to sleep through, as we anticipate the closing of the first year without Norman. I have items and ideas I have shared and will share of his and his essence. I know that his spirit is an angel on our shoulders. ---Jody-Lynn Reicher