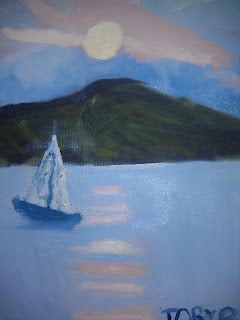 In the early spring of 1975 my Dad started wearing a pin on his outside jacket. The pin read in black letters with a white background, “Who Cares…” The only thing I could conger up in my almost teenaged mind was either, he wondered if anyone cared. Or perhaps, he no longer wanted to listen to other people’s stories. Or he had given up and didn’t care anymore. I was baffled.

Oddly enough, I never asked him. I know he wanted me to ask. But I acted as though the pin was not there. And every day was like any other day. I kept my mouth shut around him most of the time. I never talked back to any adult. I was cautious around my brother, as I feared offending anyone. Why? I wanted peace. And at the end of the day, I felt I wouldn’t matter until I became an adult and or paid some big bills for other people. I lacked self-importance. That’s just how it went. I didn’t know any better, so it was easy to accept those circumstances.

As to my attitude during my childhood and now ready to enter my seventh decade of living, next year. I ponder such oddities of my past when they arrive out seemingly nowhere. Today, it arrived as I cared about other people and their welfare. Something somehow is embedded in my persona. I have been told by a variety of people throughout my adult life that I care too much. I now wonder if it has been an over-compensation for the lack of caring I witnessed by others. I’ll answer that and say ‘perhaps’.

My mother most times did care about others. My little sister cares about other people perhaps as deeply as I do. My brother I have no clue, he’s been gone now over fifteen years. And it was never a topic I’d ever thought to bring up with him.

So, this week as attempted to touch base with old acquaintances, some aged, some I knew were suffering in illness over the past year plus. I got few on the phone. But my mind wandered as it does. I think of those, many I should say who’ve passed over the last decade or so. As time passes most people’s circles get smaller. Mine, ebb and flow. It appears as some die, I meet others. And sometimes, they just happen to be either related to the person I lost, or they were close friends with the person who had passed.

I ponder thoughts of those who barely have family around, and they are one to three decades older than myself. How their losses all affect them. I do wonder this. And I cannot comprehend my world without caring.--- Jody-Lynn Reicher