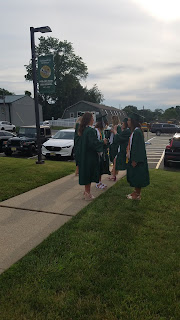 This piece is dedicated to Todd Griffith, Allendale Police Chief
The Girl Matters
As I reflect on my earnestness to make certain my daughters know they matter.  To know they deserve proper congratulatory responses. Not because they're my daughters, but because they are equal.

As I now digress.
Let me bring you back to over four decades ago. It was my graduation day, and just two years prior was my brother's.  At my brother's graduation, it was all about my brother and his peers. Like it should be.
Two years later, it was about the put down of women/girls. It was about people trying to save face in my family.  It was about a white man's pride.
So, here we were all those decades ago. I knew things, witnessed things that most will not even gather a wisp of.  Nor should they. Much I haven't expressed but to a select few of horrors done to girls I've known, some I've witnessed. And with every passing year, I knew of more... More inequality that existed. More degradation,  more destruction.The pull back of women in my family.

As I broke the family cycle,
in it all I felt disdain aimed straight at me. I had a wicked target on my back and one aimed to kill my soul,  the depth of the spirit Divinely placed inside me.
I was intuitively warned, as well my mother did caution me. Part was for my protection.  The other was to reveal and for me to keep truths that she had given to me to hold and then to release. To release them to hold people and our society accountable.  To rectify the future, so others wouldn't suffer because of their gender and perhaps because of other's jealousy.

So, when no one came to my graduation,  except a successful business owner/New York Politician's son, I accepted that. It blew this well-to-do son, my then boyfriend's mind. My Dad showed up at the end of the ceremony stood at the fence. He definitely had been drinking, pretty sure he was stoned.
As I attempted to introduce him to my boyfriend,  my Dad said, "Well I guess you ain't too much of a dummie. I got to hear my name... I'm done with you." Yes, that is what was said. He soon parted. I stood, then walked dumbfounded by the lack of enthusiasm he had. It was indeed confusing to anyone. Yet, I knew to accept it. I knew the next move in my life would be perceived as my making myself more responsible and more man than he.

As I followed my boyfriend, Todd through the crowds to his parked car. All was silent. We quickly left the crowds of parents,  family friends,  extended relatives to gather as we entered the quiet parking lot filled with parked cars alone.
My boyfriend, then a New York congressman's son appeared appalled. He unlocked the passenger side car door for me. As the gentleman he was/probably still is, he opened the door up for me, I got in. He gently closed the car door and arrived to his driver's side seat. He sat back,  sighed, and handed me a gift. "Here, I got you something.  I hope you like it."
I was thrilled. I asked, "Would you like me to open it now?" He replied, "Yes."
As I unwrapped the gift box, he began to speak. Simultaneously I found he bought me a beautiful gold watch. Something only he could've afforded to buy me. At that time in my life I'd never had, nor seen such a beautiful woman's watch that I could remember.  He said, "I feel so bad for you, Jody." I queried, "Why?" Aghast he responded,  "Jody, you're supposed to be honored today.  People weren't there for you. Your dad, unbelievable.  He didn't care." I replied, "Yeah well." I paused. It hit a cord in my soul which pained me.  I restarted, trying to show it hadn't any effect on me. "Its okay, I'm just a girl. Not popular or anything." He sucked on his teeth. "No. No. That's not right." I replied,  "But you were there for me and that does matter."
He slowly started the car, "I'm taking you out, okay?" I replied, "That'd be Great. I'd like that." He nodded we drove off and went to a high-end Inn and restaurant where he was known and was working as he attended college in the city. He treated me to peace, quiet and a nice dinner out then we drove a bit and home by ten or so. Thank you Todd, for such a positive memory,  that I will always treasure. ---Jody-Lynn Reicher