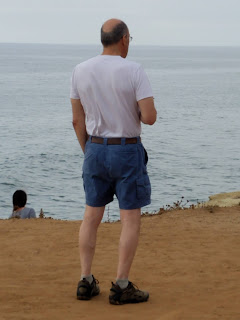 This comes from the Book of Norman…

I was always involved in sports. I still am, and also not just because of my job. Yet, at times it has been my way to wind down at the end of the day, week or from my own physical endeavors.  One thing I have done was watch Monday Night Football, Boxing matches, Wrestling matches and the like.  Anything with a set of skills, showing great strategy, strength and decisiveness, in real time.

However, my husband Norman, never really liked this.  Even though he played football in high school.  He would say to me, “I just can’t understand why anyone watches sports, let alone on television. I see it as a waste of time.”

So, at that point in our marriage, it was understood, he would let me yell at the television set during games and matches.  Then I would never talk to him about such things.  Besides, he couldn’t relate to them, anyway.  But when we got together with his old fraternity brothers I was in like Flynn.  Totally comfortable.

The only time when my husband, Norman who watched no sports at all, would watch with me. Would be if he wants to be with me.  So, one night in October 2000 B.C.  Before Children. On a Wednesday.  My husband asks me what station the World Series is on.

I give him a queried look, “Really. Why?”

He responds, “I thought you’d be interested and watching it.”

“He responded, “There’s nothing really on.  And everyone at school is talking about it.  I feel left out.”

So, I begin to realize that since Norman is a high school math teacher.  Although the women out-number the men at the school, they know more about sports than he does.  This I found out, also bothered him.  So, I decided to oblige.

“Okay.  I guess we'll turn on the baseball game.  There’s nothing good on anyway.”  We are in our bedroom. We are laying side by side, pillows propping our heads up to watch the game.

He chirps, all happy, “Hey, can I ask questions?”

I respond with a little reluctance, “Yeah, sure.  But only during advertisement.”

So now, the game is being played. A half hour passes.  Norman volleys a question during advertisement here and there to me.  I answer and explain as quickly as possible.

Then comes the big question of the night, Norman asks, “What are they doing?

“What do you mean?  What is it that has got you?”  Me seeing him unable to put into words what he is witnessing. Seemingly, every once in a while.

He responds as soon as he sees it happen. Norman gets excited and says, “Right there!  Like that thing.”

At this point I think I know what he might be asking, but not too clearly. “What?  Show me again.”

“There! They do this thing.”  He answers.

“What? The touch thing?”  I ask. Thinking now as one of the coaches I see is signing. “Oh, you mean signing. Like this this this this… ” Showing him tap my head shoulders, etc…

“Yeah. Yeah. Why is he signing? What’s that?” Norman asks.

“Oh.  Well, I guess you didn’t realize the really big story behind this Subway Series. I mean like, who really cares about two teams from the same state, playing against one another. I mean like, how could you sell a lot of tickets, Right?”  I reply.

He tilts his head, with a queried look.  He appears to get more interested and excited.

“Honey, this is history in the making.  It’s stupendous. The reason why they are signing so much.  It’s really how they communicate.  They have to sign. And the most amazing thing is everybody on the METS team, except Mike Piazza, is deaf. And it’s just amazing.  No other Major Baseball Team, has ever had a near all deaf squad and made it to the World Series.” I apparently conclude.

A stunned Norman, “WoW!!!  Now I understand, why all the women are into this at school.”

I nod assuredly to my husband. “It’s amazing isn’t it.”

I ponder, how long can I convince my husband of this untruth?  I wait ten minutes.  I got him convinced. I decide, that I’d better not let him go to school tomorrow morning this way.  He will never live it down.  So, I then tell him the truth. Yep. I had him.