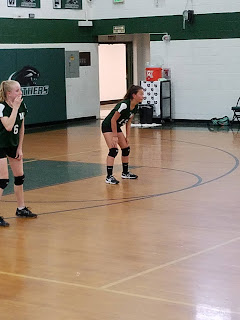 A few nights ago, my two teenaged daughters were upset with one another. It had been mounting, the pressure that is. Finally, I called for a meeting in the basement, bright lighting shown and all. I remarked, “So, you don’t like her criticizing you. And you don’t like her peanut gallery judgements. Well, I do not like any of it. So, here now please agree to stop doing that. Both those things.” By the way, a little psychological trick I learned from “Mind Strategist” Dr. Dan Schaefer, author of “CLICK!”. The little trick is to not use the word(s) while instructing what you want someone to NOT do or touch.  So, I used the word ‘THAT’. Or the phrase, “Both those things”, instead.

Of course, the two begin blaming each other for their reactions. I tell them, “You can’t blame each other. That’s just ridiculous. Let us just stop saying those things.” There were grumbles, yet I pointed out each individual’s personality trait that annoyed the other. And I pointed out the lack of sensitivities in each other’s direction. Basically, I played the ‘Bad Guy’ (e.g.: Facilitator).

I pointed out the fact that they are opposites. Being sensitive and not firing back immediately did not equate to being a wimp. And that a brush off seemingly callous, was perhaps not what the other was reading all the way through. It was perhaps a hidden agenda or a protective mechanism from her sister. Sounds complex, but as the mother of two teenaged daughters the view goes like this: could be a hormonal response, teenagers do not tell their parents everything, school issues, friend issues, fear of moving on, pandemic response, etc… I could list a ton of reasons. However, you get the picture. As well, I will remind them not to blame, yet to reason.

In lieu of all this mental drama, it has been a tad calmer since that evening. As they got calmer, I knew I had an important appointment. One I don’t mind attending, under normal circumstances. However, this time around because of the pandemic, and the safety precautions which I’ve put in place before the pandemic was declared. I had done purposely back in December 2019. It was soon after my husband had been diagnosed with Stage 4 Pancreatic Cancer.  Fortunately, because of my business in over twenty-six years, dealing with mostly autoimmune compromised pain patients, and other injured persons that mostly medical doctors would refer to me. I understand the dire need for a household to remain and become a safe-haven from most seemingly ordinary germs that most of us are fine with. This being with the exception, of cancer patients, geriatric pre-op/post-op patients, autoimmune suppressed pain patients, and the like. I added a new cleaning routine back then was comprised with my own anti-fungal and anti-bacterial concoction that was biodegradable and easy on the skin. I used plenty of small rags which go into the laundry.

So, here I was at an annual check. I arrived fifteen minutes early.  That’s just a process of mine. Let them know I’ll be on-time. I called from the parking lot. They told me to come right up. I entered. As I entered, they checked my temperature. I looked around and the place was near fifty percent filled. To me, now a single mother and helping relatives on a regular basis who had their losses. Some of them have compromised autoimmune systems, or are seeing people with such. I’ve maintained the mindset of my being healthy for everyone. Whether all this works or not, I’ll error on the side of caution.

As I answered questions on a hand-held computer item they sanitized and handed to me. This took all of five minutes.  There were no blips on the radar screen for me to report. Nothing had changed in medical coverage, etc… Time was now ticking. I knew there might be emergencies. Perhaps, the doctor could be running thirty minutes late. After twenty minutes passed my appointment time. Which was thirty-five minutes I’d been sitting in their semi-crowded (for a pandemic) waiting room. I inquired respectfully. Asking if they had everything they needed on me. As well, letting them know that I had a commitment I did not want to miss.

Oh. The commitment. It’s a simple one to most. But in my soul, I truly wanted to be at my oldest last Volleyball game of high school. She, a senior this year. Although, I recognize the losses that all the children have incurred in their lives due to the pandemic in this country. Some would harshly say to ‘suck it up’. I understand that as a former US Marine, and someone who’s earned money in three sports professionally while working full-time, parenting, and being a wife.

However, when your teenaged daughter who had never known her biological parents, as she was abandoned as an infant. And because of how she views as her ‘mix’. With ‘tongue in cheek’, calls herself, “A Hostess-Twinkie”. Then top that with, the only father she’d ever known, die nearly right before her eyes in the summer going into her senior year of high school during a pandemic. As she will be playing in her last game that later afternoon. Well then, you’ve got to make it to that game that is not crowded.  That is where you compromise. As well, our school is quite safe. Safer than a doctor’s office or a food store, by far.

At the end of the day, the doctors were near an hour late. More time passed as I waited, I explained to the assistant briefly how their front office should have had me wait in the parking lot. He understood. As well, I found out that in confirming they did not follow their own ‘new’ processes. Their botched situation, thus effected mine. I got back into my car two hours and fifteen minutes from when I’d arrived for my appointment. I had yet to drive to the game. So, all in all, it was too late for me to go and witness my oldest daughter’s last game. She played. Her team won. They were happy. She was understanding. And to the point, as I had attended much of everything in her life. She was very cool with this, for she is becoming what every parent should desire for their children. Independent, that scary notion.  And comically, the answer is… “Yes, I don’t sleep.”---Jody-Lynn Reicher