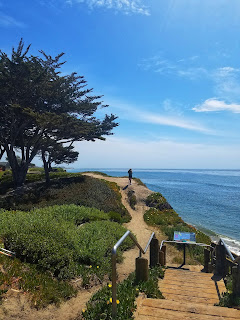 The intersection
I always wanted to create independence in my children. Yet, there is a dichotomy in parenting.  It's the push pull. Or at least that's what I call it.

In my mind, the constant ebb and flow of parenting has been since I was a child. It was subtle then.  But I knew what it was.  I watched it. I was the parent-child. The parent-child is perhaps the Great worrier. As ironic as that seems, it's the intersection I've wrestled with.

I wanted to be free. As a child I knew I had to be somewhat of a 'Babysitter' to not only my older and younger siblings, as well my parents.  For I was the child parenting the whereabouts of my parents. The whereabouts was not just a physical  entity. It was the arena of their status of an emotional whereabouts that they might be.

I was always in check.  I knew at some point and time I would have to let go of parenting my siblings, or rather monitoring their whereabouts.  My parents?  I wondered when that would end.

Even when I entered Marine Corps Bootcamp it didn't end primarily with my parents. Even there I was tortured.  In the middle of bootcamp, our first lieutenant had me brought into her office. Why? To talk about the status of my parents. I wondered why.  I was ordinary. Kept a low profile.  Was obedient,  striving to do all and then some as I was ordered to do. Yet somehow, the instability of my parents selfishly arrived during my bootcamp. I'd done nothing wrong. I was fine. Although worried, I never expressed it. I prayed.  That was how I handled the problems in my life back then.

I was called in for a sit-down meeting with my lieutenant, she appeared more upset than I.  I showed no emotion. I knew I'd helped my mother monetarily before I left.  She hadn't committed suicide yet, so I was lucky. That's all that mattered. Making it so that my much younger sibling was safe. And my Dad hadn't crashed a car or lost his license due to his getting stoned or drunk. So there was that. I was good.

Yet I was pretty certain the lieutenant had no clue on those fronts. So, I was good with that. She was stunned when she felt she'd delivered bad news to me about my parents that day. She thought she knew the bad news before I did. I hate to say the situation made her get emotional.  I couldn't believe she allowed me to capture that moment.

Evidently, they had gone through my mail or someone had called the Marine Corps bootcamp with information I'd accepted easily. And back then such information was not considered too digestible. But for me it absolutely was. It relieved some pain. So, the meeting was short, as our stunned lieutenant tried to see me arrive at some emotional pitstop.  But that never arrived. Or at least it never showed. Most times I refrain from showing tears at funerals or the like. I despise my own public display of such emotion, for I have too much to care for.

After releasing my parents from my parenting, as for my Dad it was when I was forty-nine. Oh I tried. I'd thought I had twice in my thirties, and once in my mid forties. Then finally, I verbally cut the umbilical cord on the phone with him. I released my Mom multiple times, but I failed till she died. Then at age forty-one I was quite less tortured.  Life was splendidly lighter. My siblings were the easiest, because they appeared properly Independent early on.

Now, as I am a single parent due to the death of my husband, I still pray with concern for our two daughters. However, I am at the intersection of failed trepidation. This morning I recognized their desire,  need and accessibility to independence.

It arrived as my oldest daughter was exiting to get a cup of coffee before her school day, apparently not wanting to even say goodbye. It's not me,  its "Mom, I got this". So I waved to allow her independence to forge ahead. I know what she wants and it is truly all good. I had lots of practice early on. ----Jody-Lynn Reicher