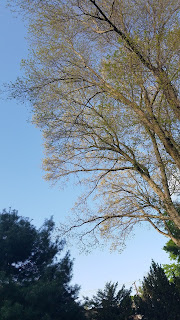 It is amazing the way this day lands in 2021. Today, this year the date April 4th cuts across multiple cultural/ethnic and religious lines... It is the date that MLK was assassinated, which I remember vividly. This year it is Easter. And it is Qingming Festival... Tomb-sweeping Day in China, Malaysia, Thailand and in about eight other countries it is celebrated.

All three items are significant to me. Firstly, I come from Lutheran and Catholic religious families. Secondly, there will always remain a red thread in my soul and across my heart… I have Chinese family and Thai family relations.  And Third, this date is to me is the first although solemn, as a most significant piece of history I remember from my childhood. It was the assassination of MLK. It was a horrid day. One I won’t ever forget. I still feel the loss, deep in my soul. The Vietnam War is second in my childhood memory of historical events.  The names of the dead, casualty numbers shown on our television sets, ‘In Memory of…”, are embedded in my mind perhaps forever. Hauntingly so.

I wondered why everything was more quiet than usual this afternoon as I made mint jelly, marinated a leg of lamb, checked messages, edited a screenplay and wrote. My oldest was working, my youngest was resting and being her creative self, quietly. Our pets, the two bunnies were passed out, under my now deceased husband’s favorite chair. And our male guinea pig lay in a pile of hay, sleeping in his cage.

As I stirred, then checked our plants indoors and outside, something was tapping my essence. It was an odd Easter. It’s been a ‘strange time’ for over a year now, for most of us in the world. I noted that. Then came the whispers in my mind… ‘there’s more to this moment. Something’s missing…’. My steady mind queried my upper mind about the death of MLK. And I kept pondering as I walked around our yard and stirred the mint jelly on the stove.

So, as would be the usual nowadays when you have a question… you search the internet for the answer. And yes, there it was, both MLK’s assassination and Qingming Festival. And right after I saw that… it popped up on one of my social media pages, both did. I internally asked myself if anyone may have realized this. Then there arrives that self-inquiry, ‘Did anyone want to know about anything other than Easter today?’

People mostly become self-contained on a holiday. Yet, in the past thirteen months, societies have been nearly beckoned to view our world and its people globally.  And that is highly unusual. I have found that as much as many of us want to think that we may be altruistic. We are not. Few are altruistic much of the time. Many times, altruism is seen as a weakness. However, I see it as a necessity. A necessity to truly feel fulfilled before the end of this human life. The one we are living in this very moment in each of our self-contained vessels, holding only what one knows what is inside, itself.

A few weeks back I was speaking with one of my husband’s cousins and his wife, both are medical

doctors.They, out on the west coast, me here on the east. As we chatted for nearly an hour on the phone.

I was describing personalities of my daughters. They commented on the giving aspect of their

“You know the giver, lives a better life in the end.” One commented and the other concurred