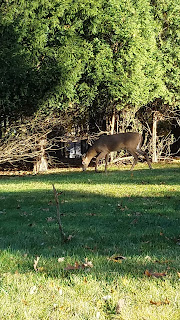 There are things in life you truly never want to have to tell your children, but must.  And there things in life most will NOT ever have to explain to their children. In turn, many will NOT be compelled to discuss nor bring up certain traumatic events/subjects with any real depth or knowledge to another human being.


Years ago my worry was, 'How do I explain certain things in my family's past that are tragic, without traumatizing my children?' Its a great question.

There is a time and a place for everything.  You just have to wait for it, and bank on your soulful intuition.

Today, realizing my one daughter is now eighteen. I arrived at a sobering thought. A reminder of sorts. Something I knew about way before I was age eleven. Yet, as I explained it, I told her I was blessed. That was my explanation of how I avoided a tragedy, that many other children in the past in my family were unable to avoid.

As well, intuitively I was a protector of sorts. As busy as I've always been,  I've made it a point to remain a protector of sorts. I laid the ground work with my now deceased husband for our daughters to know what NOT to accept as normal.  We explained what abuse was, early on. We made certain others did too, while we watched our daughters in their martial art classes for over a decade.

So, after a quiet New Year's Eve last night, before she headed to work, I made her a cup of coffee. I began to tell her what cruelty was. However,  just before that I said, "You did the right thing last night. This is serious business." She seemed disappointed, yet nodded. She understood.

I explained to her why certain people in my family were out of control when I was a kid,  and the ones who were innocent were punished by it. As well, as how it effected generations on one side of my family. My mother tried to break the cycle. However, I was the one who did.

There was more than one cycle among girls and women in my family that needed to be broken. One my sister and I did.  And one I was the beginning of Breaking through, and was successful at. Yes, there are always more cycles to be broken. However, those two were the most oppressive and damning. And now I've uncloaked the skeleton in the closet to our oldest daughter. I did that today.

It took a few minutes to explain a chunk of it. Yet, on some level without my saying so, she knows that today because of her overall actions of responsibility that she HAS demonstrated,  I knew she was ready for some damning traumatic information.  And so, it was delivered. The raw, straightforward, disdainful and painful information that will protect her as it has, as well protect others in the future. ----Jody-Lynn Reicher