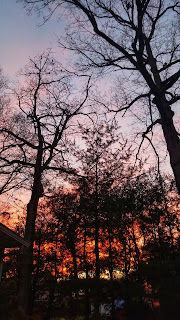 "Be here now..." He'd say... I heard that thirty years ago... from a body worker some called "The Voodoo Man". He fixed the unfixable,  that is if you were willing to 'pain-through-it'. I was. Extraordinarily so. How? Why? Birth-defects, Childhood experiences, Life's Observations... perhaps Faith.

If you were me, you knew time was and is always running out.  And I mean that figuratively and literally. I know I have been and am on borrowed time. As few may realize.

In the reality of being 'Here Now', nearly fifteen years later my UltraRunning coach would say, "We face our demons... that's who we fight when we run." Between the few years he lived closer to me he'd had me run up to twenty-five miles in sand in the pine barrens of South Jersey on our thirty-five to fifty mile weekly long runs together.

That line was pinned into the same consciousness of my mind as 'Be Here Now'. Two different people allowing me to go to my extremes, whether it caused me to 'See God' so to speak, or piss blood... as I'd run holding my gut from self-implosion due to inflammation from the inability to pee properly due to kidney stones or something else bursting inside of me... gastro-intestinal bleeding ... the inability to keep anything in, yet drive forty minutes to work in agony while wearing a suit and arriving to work fifteen minutes early and at times working hours after people have left the office for the day. Or later in life to work on pained bodies.

All this somehow did not stop me. It brought me to a point of realizing as fragile as we are, and as frail as human existence can be... there is much more to be had than what we and the medical field allows us to give credit to our ability to heal, or perhaps to naturally alter our current position. I call it. "Our Medical Divinity", the thing we are ALL blessed with.

I'd wondered what made my husband push me into fighting, years ago.  I thought he felt I'd do a fight and bag it... like get 'it' out of my system.  But you see, if you're real with yourself... you...ALL of us will always have to fight our demons. It's just that, we ALL  do it differently.  There is no right or wrong, most times. Although people WILL criticize your spiritual essence of the pattern you choose to work it out, so you can somehow survive in a society unwilling to accept what you know... Or how you feel. Society in general is into wanting us to ... mask how we feel... What is considered our deep art of our living our own truth.

And 'Yes' fighting has and still brings me to another layer of truth. You don't just fight. You train to get there. Most don't understand that. I've found that out about distance running too. Everyone wants to claim they run or are a marathoner,  yet they have no true commitment.  A discussion coach Tom Fleming and I had multiple times back a few decades ago.

Everyone thinks they can fight or take on an intruder in the street.  I can tell you now, almost noone is that tough... just because. I've seen enough 'posers'. Just like in running I offered some, "Yo! I got $20. Come run ten miles of my sixty with me." All refused. To me that's a no brainer, an easy $20. Its similar to people saying, "I want to come to the fight gym and watch you." 98% of them bail. Perhaps, they're afraid to see blood, hard work, what is considered an unnatural way of sport... or they're afraid of the 'Here Now', the Truth. Instead they wrinkle their nose, finding it freakish.

Currently,  and perhaps in the end I know I will be misconstrued.  However, I know my demons, because I'm 'Here Now' practically all the time. ---Jody-Lynn Reicher