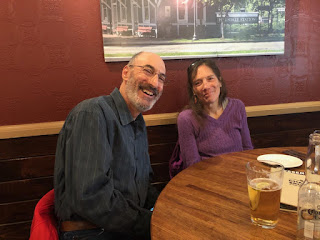 It was 1987, we'd just had a semi long motorcycle ride up North together for a week. New England that'd be.  Norman was all enthralled about the open road. Married just over three years at the time, and he rediscovered a new love.  Me wary, yet curious.  'Maybe she'll ride easier.  Less bumpy on certain roadways of upstate New York'.

Norman even had me considering getting a motorcycle license.  I'd driven nearly every style, engine from small military jeep to tractor trailers... Yet, I hadn't touched base on being a motorcyclist. I held off enjoying Norman driving, having me ride on the back of his motorcycle.

Before I knew it he arrived home now the new owner of a BMW R80RT. Just two years before he swore off ever owning anything BMW. It was our joke, "NO MBA, NO CONDO, AND NO BMW". It was actually a black shirt with white lettering he wore proudly in 1985. Meaning, we weren't going to be one of those privileged Yuppies.

So, after his father passed, that is when months later Norman purchased the 1986 BMW R80RT off the lot in late 1987. I think he began to realize what I knew too early in life... 'I could be dead tomorrow... What I know now, could all be erased...' It was time to do, and not wait.

Later in life, thirty years into our marriage he said one day, "Jody, you and Dan Sheridan are so much alike." I inquired, "Yeah? How?" Norman replied, "You go for it . You take everything and throw it on the wall. And whatever sticks, you go with it." I thought for a second, "Huh. Well, you can't just sit around.  You gotta' move. Be productive.  Don't hesitate on everything,  cause it could be gone... the moment then is lost."

At times, I knew I truly perplexed him. It wasn't my intention. June 1989 we were Laconia, New Hampshire. Norman had ridden he and I up for a week's vacation.  One thing we hadn't realized, yet Norman had wanted to experience it. Was it was Motorcycle week we arrived on.

Thousands of motorcyclists from all over, gangs and well everyone. Including the French-Canadian wild women... skinny as they may appear,  could drink any 350 pound man under the table, pouring down bottles, not shots of Stoly. Vodka that is every night.   I marveled at their potential liver functioning at high capacity. For vodka was something I wouldn't touch.

That was one of our last long road trips with me on the back of the motorcycle.  I decided I loved my health, we wanted children,  as well we became busy in the middle of our being busy changing careers and dealing with a tragedy all at the same time.  However, he rode alone, happy, as I prayed.  As much as I began to not feel safe about him being on a motorcycle, I dare not hold him back because, it was who he was... And we had ridden to Canada too.😊 --- Jody-Lynn Reicher