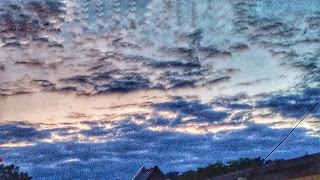 “When it is dark enough, you can see the stars.” ---Ralph Waldo Emerson

There are many ways to shed light on seemingly impossible situations or what we would consider obstacles to our daily living. It is not always in our daily intake and output that is the measurement of a human being. It is the grind. Some people struggle with miniscule grinds; while others have bus loads to grind through. Some don’t make it. Few do. Making it, is not, not dying. It’s progressing through even when there appears no light at the end of the tunnel. That there may not even be a twinkle of a star in the nights ahead. And the human that faces that, knowing full well that they can’t change the ending to their earthly story. Yet, they consciously go through the process, has made it. They’ve lived. No matter their age, I believe that, to be one of Life’s truths.

As this year has progressed, the pandemic actually blessed us. Yep. Many would not agree with that. But then, they weren’t us. They weren’t our family of four. The family of four kept at bay, restrained for the most part. Oh, The Blessing… We got to spend our precious hours and days together like never before. My work was halted, yet I comfortably wrote forty to sixty hours a week, unable to sleep filled with concern for my dying spouse, my children’s father, as well as our children. Which was not for naught.

Leading up to Norman’s diagnosis in late 2019, he got to see our youngest daughter’s band win a HUGE New York State marching band competition, and being a small high school marching band from New Jersey, that’s big. And the happiness that surrounded it as well. He got to see our oldest enjoy playing her volleyball games, our youngest start her first high school year playing tennis and trying her hand at wrestling… that is high school boys wrestling. Norm would say during her matches and at home, “Jody I’m kicking myself, wrestling is such a great sport. I should have pursued it.” Showing an ‘Awe shucks, head-shaker moment’.

I got to enjoy Norman get excited for our oldest and youngest achieving academic awards at the end of the school year in June 2020. Albeit, everything was online …the awards ceremony, etc... He enjoyed my calling out from downstairs… “I finished the screenplay! Yipeeee!!!!!!” He truly got a charge out of that. I invented so many different ways of making food palatable for him. Too, since he was becoming more ill towards the summer, I’d take videos and pictures and bring them to him now kept at bay on our living room couch, and show him how the garden was progressing. It was the best garden he and I’d ever seen since we’d been married over thirty-six years.

Norman, was not as much as I was opposed to certain allopathic methods for his condition, I refrained from giving him my opinion. I said not a word. I waited for him. I waited for his decision, which our oldest initially was not happy with his first decision. She was smart enough to know what I knew. I responded to her query of, ‘how could I allow her father to go down a road I knew was wrong and one I deep down didn’t agree with’, but said nothing. I explained to her, “He’s an adult. You have to respect his decision. It is between your Dad and his Maker. It’s none of my business, nor anyone else’s.” She was stunned. But it was a life lesson.

Soon, a few days after that, Norman changed his mind. He’d realized, that it was quality of life which is what he had always wanted. And so, he reversed his decisions and in doing so, he had more quality than anyone could have ever expected and lived longer than the allopathic medical field anticipated. He was alert and functioning till the very last day of his life on this planet. He had no unwanted side effects from outside sources of medicines everyone thought would extend his life, yet take away his ability to go outside under forty-five degrees, go for a run, go for a walk, mow the lawn, or give himself a simple shave. He had gained five more months of quality that the allopathic medical field never expected him to have. Like mowing our acre in ninety minutes on Memorial Day weekend, when the medical field predicted he’d be gone at least two months prior. He also had more months of living than they expected as well.

All in all, we as a family of four were given the opportunity to spend the majority of our unit of four together more than ever in our existence. That was a blessing. We were all part of the process of his final hours, days, weeks and months of Norman’s life. And there is no unpeace in that. In his final hours, Norman had somehow pulled himself up into a seated position in a bed five feet from me. And there upon his face was a joyful look of Hope. That appeared pinned, long enough on his face, so that I and our two daughters could see, one more twinkle in his eyes, after he had passed.

Believe it or not that was just a little more than half our year in 2020. Not that there has not been bumps in the road, or lumps in our oatmeal. It’s that, the pandemic helped our family manage… giving full exposure to who their father my husband truly was. He knew how to say good-bye, and he knew what Hope was and he watched me have Faith that in the end everything would be okay. That his leaving although early, was forgivable. And that is what gave him peace.

As we are now here, another school year. A final one for our now eighteen-year old daughter. She applying to various colleges, taking four AP courses in her senior year and working thirty to forty hours a week holding down two jobs. Our youngest in all Honors courses for her Sophomore year. Working on getting her driver’s permit. She played in her second year of tennis, as well marching band was able to be had. Albeit, a non-competitive season, due to the pandemic. She improved in many areas too.  I went on a Sabbatical, even after they allowed my industry to get back to our practices. I decided with all the paperwork, the writing, online classes for work, having taken over Norman’s chores of mowing and such, as well, wanting to monitor our children through what may be a rough year for them, it would be best.

The beauty of all that was, I was doing the home improvements that I’d been wanting to do for the last three years, in the home and outside the house. I learned how to grow my own apple, pine, pear, avocado, and mango trees. I created a mini tropical greenhouse for indoors. I got grass to grow in areas we hadn’t seen grass grow on our front lawn in years. I learned how to make my own leaf mulch. I retrained our bunnies to do their litter in the box and they are now free-range bunnies… that is they only have one floor we allow them to be on. Oh, they get to watch television with me in the living room, they like that. And Mr. Cocoa Bean our only male in the house, gets six to eight hours of free-range with the two girl bunnies, Nibbles and Aspen.

And yes, I’m still staying in shape, running and so forth. I just do everything alone…which works for me. I’ve gotten our youngest tennis lessons off season now, and I sneak in and take one before her with her friend’s Mom.  This is the first time I’ve ever been unemployed since 1978.  Lots of writing, studying, raking, mowing, shoveling, running, lifting, and inventing going on instead. And crazily I’ve learned more ways to make my own dairy free butter, milk and gluten-free flour (saves money).So, if we look at this year, that we detest so much. Remember its’ not what it’s done to you. Its’ what you’ve done with it.--- Jody-Lynn Reicher