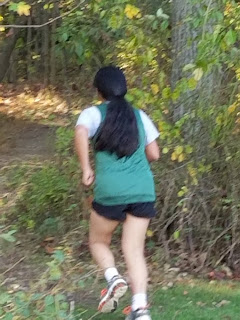 I look back now over forty-five years of regular organized competitive sports in my life. Staying in shape has it's own dilemmas, when you have minor birth defects and are uncoordinated. I began competing in sport by the spring/summer 1971.  A time when the Billy Jean King's of the world struggled for recognition and funding for women's sports not only at the collegiate level, yet on a professional level as well.

As much as I've not been a tennis player, as I've been a runner, a grappler and a fighter; I have always appreciated people like tennis star Billy Jean King. She pushed for Title IX.  And WE. Yes WE, us girls and women finally received the recognition we had always deserved. Billy Jean and others like her saw to it.

I met Billy Jean King, on a Monday night in a corporate center, in and around the area of Somerset, New Jersey. She spoke before the five kilometer race was to begin that night at seven. That was over twenty years ago. But I still remember that night. And to me, she was and is still a rock star. She equaled the admiration I've had for President Jimmy Carter. Even if we didn't particularly agree with his politics. It has been his being a humanitarian that we should all desire to be. It has been his desire for world peace, that we should all encourage others to want and for us to want as well.

Going back to Billy Jean King though, I was told a girl would never beat a guy in running, especially a girl like me with no talent.  Especially, a girl like me. A ditch-digger's daughter. A girl who never went to Villa Nova, Stanford, Texas A&M, UNC, or Dartmouth. Neither could she, nor would she, instead knowing such. Knowing the one thing I could do was to serve. And if I served in a military area like being a US Marine and I survived, I knew I'd always be employable. So I followed through and became a Marine.

And still, as years passed, I was told a girl or a woman could never win a race outright over a field of men and women. Thusly, I won three races outright over the men and women later in life, in my early forties. A Fifty Miler in Detroit, on a mix of cross-country terrain in a wicked storm that produced tornados in the Midwest in November of 2002.

I set the Twenty-four Hour Women’s Treadmill Record in 2005 at age forty-two, six months, two weeks and ten days old, for North America. At the time I was ranked second in the world until 2017 for that distance and timed type of a run, now as this goes to print.... That distance I ran for the 24 hour treadmill run is now third in the world and still holding the North American record for that distance and time for women on a treadmill.
I’ve raced and ran across deserts, trails, all sorts of surfaces. I’ve ran up the side of mountains when I was nearly falling backward due to the incredible grade; such as Mount Whitney in California, and Smuggler’s Notch in Stowe, VT. I've been the main-event in four amateur fights and two pro fights. Fought nineteen stand-ups, over one hundred grappling matches. Had sixteen grappling matches against men, up to one hundred sixty pounds, my weighing in at most one hundred six pounds, only one man submitted me, the rest won on points. All that between ages forty-six and fifty-four years of age.
I could list my birth defects, but see it wouldn't matter.  Some of you may  think I'm hiding some special talent or something... Well... maybe I am. Or maybe I've gravitated to learn, then to know; that consistency, hard work, regardless of how ugly it looks or I look defeating my demons while trying to learn perfect practice is actually a by-product of what you are seeing. And yes, I've lost more than I've won. But then again, I've competed somewhere between nine hundred and a thousand times in various sports. What this says...is that when someone, like a Billy Jean King opens the door for US... We better damn well run through it... and keep the DAMN door open for the next Billy Jean King's of the world.---Jody-Lynn Reicher