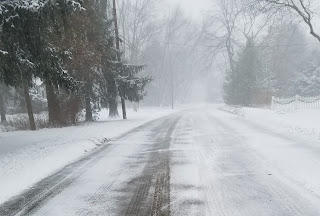 The other day, my niece texts me… “Do you have shovels I could borrow…” I replied, “Sure.  I’ll check what we have. But I’m certain we have a snow shovel you could use.”

After responding, I go out to our garage. I open our door to the garage and there to my right near my cross-country skis are not one, not two, not three…but five snow shovels. As I look across the garage, I see another one hanging on the wall. I go back inside and text her, “I’m bringing more than one snow shovel.”  I know her daughters are going to want to help. One of the shovels is light enough for a small child.

Over the next couple of days, after I dropped off the shovels at her home, I begin to realize how overkill six snow shovels are.  I mean, we do live in the mid-Atlantic state area. As I chuckle to myself.  It’s not New Brunswick Canada or upper Vermont or Maine. We live in New Jersey. So, ‘how in the world did we end up with six shovels?’ I wondered.

Then I realize my now deceased husband was in charge of buying snow shovels. He and I split up the needs of the house to be done and gotten. When you were in a near thirty-nine year relationship, you kind of know a little bit about one another.

Over the years we had relatives, coaches and friends guessing what role we played in our own marriage, of what was Norman and Jody-Lynn. Well, as my niece found out over the past two months is that we shared responsibilities. He picked up where I left off. And visa versa.  It had gotten to the point, I’d say something he was thinking about a floor or two away in our home, simultaneously as he was thinking in his mind. I’d say, “Honey! You know…”  And he’d respond, “I was just thinking that. Did I say anything out loud just now?”  I responded, “No, I heard your thought.” Yep. I did, and it would freak HIM OUT.

Nearly, all the time he was stunned by my response.  But it was as if I’d heard him. It was a whisper to my soul simultaneously from his. Or so it had seemed. As much as we were different and disagreed on many issues, we remained a team, a partnership, a corporation, if you will.

Going back to looking at the snow shovels. That was clearly Norm’s doing. When it came to winter jackets and raincoats, he was in charge. He’d say, “It’s the stitching. You need the best. You go to the best clothing outfitters. And the stuff will last forever.” If he saw poor stitching in clothing after it arrived in the mail, he’d say, “See, this is going to breakdown fast. A couple wears you’re done.  I know it.” He’d call up the company and ask to return the item before it was worn. He knew what he was talking about. For one side of his family had been furriers, generations ago.

About twenty-two plus years ago at midnight. As a matter of fact, it was July 3rd, 1998, a Saturday night. He gets out of bed and says, “I’m going to a 24-hour Home Depot.” I reply out of a sound sleep, ‘What for? And where?”  He replies, “Its in Orange. Need anything?”  I respond, “Uh. Yeah. A tamper and a five foot long metal, twenty pound metal thing that looks like a big nail. I forgot what it’s called. I just had a long week.” He gets a pad and writes it down.

I reply, “It’s not a nail. But just describe it to them and they’ll know what I mean. Trust me they will. The tamper, not a tampon is to smooth out the ground after digging and building something. Trust me they’ll direct you.  Just don’t say tampon.” And off Norm went.

Early next morning I awoke Norm telling me he indeed bought the big five foot long nail like looking metal thing, known as a spud-pryer and a tamper for me. And the snow shovels… well, he would buy the latest and the greatest hand tools. Things that wouldn’t die out or rot for one hundred years. You bought a car in cash, and it better make it to at least 160,000 miles in your possession. If it didn’t it was a lemon. I agree on that thought. Still do. And after 160,000 miles you give it to someone else who can bring it to 180,000 or 200,000 miles in usage.

However, Norm was notorious for making certain items were up to peak performance including shovels. I’d hear him say, “Jody, you got to check this out. Come here. Look at the handle. See. Great idea.  I’m getting one.”  I’d respond, “If you think so Honey.” I’d shrug. I’d shrug because I knew he researched it. And I also shrugged because we were opposites. I would make something work. When it came to hand tools such as axes, hammers, shovels, rakes. I didn’t care to get detailed. I wanted to get the job done.

In the end, with all Norm’s innocence that he had, I told him so. He did not rebut me that day a year ago. His soul was filled with innocence, mine was not. I know too much. It did indeed shock me, that he was leaving this earth before me. For what I’ve witnessed and I have known have stolen parts of my innocence, as I hold onto that small piece left inside of me. As well, Norm tried to last long enough to get the job done. However, try as he might, he couldn’t get to the finish line with me. The beauty is, as scary as life appears and has always appeared to me… I have no choice but to stick it out, keep pluggin’ through, till I get the job done. And that I will do. For it is my oath to my Maker.---Jody-Lynn Reicher