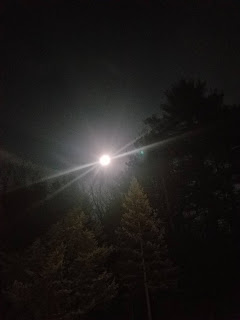 Growing up, I recall multiple times my Dad had to use a cane to standup. This happened for about a week once a year. He was a hard labor worker. I was born after he had turned age twenty-five. So, I was well aware of when this crippling occurence would arrive in his life, throughout my childhood.

As well, he suffered a deeper wound. One that no amount of alcohol, pot, cigarettes,  nor cheery wife nor child could abate. If one observed close enough, quietly, the deep rumble could be heard... It was what I call a sickness of the soul.

He had polio as a child. It arrived on his eleventh birthday.  But you see, apparently according to what his mother said to him prior to that, and the stories he told me, well he was always just THAT way. A disgruntled employee  of the earth. There were many comments passed privately on that... I heard them from my Mom and he himself would repeat what others said to him in anger and he would then smirk, or perhaps give a chuckle. It wasn't always necessarily any form of shame on his part. It was more of a Pride filled 'Gotcha' moment, with some whiff of cruelty behind it.

Coming forward, after he left us, he eventually developed another illness. However, within a decade of that his back pain abated him for twenty years, till the last few years of his life. He had expressed this to me in his fifties. And unbelievably so, made it to near his eighty first birthday, albeit without me. For I refused to butt heads with a person who wants to see everyone fail. I learned to turn the other cheek, check in a few times, forgive and walk away, leaving the person to their own self-implosion. I'd finally reasoned, that saving myself from abusiveness was appropriate, so I could give my Love to people who would not discard it, nor crap on it.

From a distance over the years I have been reminded that other's suffering is as important if not more important than mine. So long as they hadn't become too toxic to others,  no matter who they are.

The more I made my Dad connect with me and my little family, the more he despised me.  For he knew I had birth defects, tragedy, etc... Because Life happens while you are living. As well, I did things that drove my soul. I desired and still do to fulfill my callings, whatever they may be. And not unlike his father, as my mother had commented to me at times, "Jody, you're too honest."  His Dad was honest to a fault.  I had three people claim that about myself.  Most times as a child I kept my mouth shut. But after being in the Marines, they opened it for me. My Dad former Air Force hated not only my honesty, but my Marine-ness.

There was a day fifteen years ago I was driving us back to my home here in New Jersey out from Northwestern Pennsylvania.  It was a happy celebration the two of us were at, yet hovering over us was the fact that my brother's life hung in the balance in a coma of no return. His third son, third time he would experience the physical loss of a child. I knew so.  As usual, I remained, calm, quiet, reserved and diplomatic on our seven hour drive.

Dad would chat, ask a question.  I'd malbatrate it in my brain, slowly, with diplomatic caution respond to him as I drove. My being the Driver, allowed for the pause.  A sort of fake respect he had to give me. Yeah see, I learned that while dancing around his volatility as a child. I usually apply what I learn, whether the lesson is paid for or not. Now I smirk and wag my head.

So finally,  in the last two minutes of that seven hour drive, he asked me a question.  But now you see, he figured I was tired. So, he interjected a question that one would have thought would have fired up any anger or rather rage in my soul. It was clearly a test. And after near seven hours of driving I knew I was raw for it.  But yet, for me it was not a trick question as he felt it was.

His question was, "Aren't you angry about that? You can't still love.  You hate him, right?"

I replied methodically as I had during those driving hours. "No. I see it differently. Yah see, I lose if I hate.  I expend energy that is not fruitful for me, nor my family. I believe, if I throw enough Love out there, then I've really won. And that is my intention."

He responded, "But don't you even feel sorry for yourself?"

I replied, "No. I get upset when the pain hits or I receive in my body or soul a disturbance.  Then I forgive it, pray and move on. I have too much to get done, Dad."

He naturally irritated sucked his teeth.  He wagged his head,  "Really?"

I responded,  "Its the only way to be.  I'd rather be Better not Bitter."---Jody-Lynn Reicher