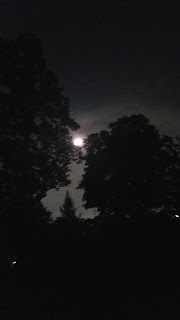 One day about seven years ago, I saw a woman who lived on our block out walking.  I'd seen her here and there, walking once in a while. She had a nice figure. I would say she was a 'well-figured' woman. Having all the curves tip to toenail women usually strive for,  in order to be considered beautiful,  healthy, so forth.

And when you're in you early forties, you may still be holding onto the figure that you had before children, as she appeared to have.
When she saw me, ready to run by her, she called out my name. I paused my running watch and jogged in place.
She continued. "I want to know how come you are so fit. I walk..."
She basically felt she did as much as I did physically... and that she should have my 'ehhh hmm' figure. I was stunned, to say the least.  Partly because I don't have the well-endowed figure. Rather, my aim is at being lean, spartan-like, and healthy.

Here she was a stay-at-home mom, not doing all the cleaning in her home (I did know this.), Not exercising everyday, with any regularity.  I never saw her out gardening when we could, nor swinging a pic-axe. Her hair and everything about her, was so properly coiffed.  She wore the perfect clothing for the suburban mom who was or I should say appeared perfect.


As I answered her knowing I have nearly a decade more of living on this earth than she... "Well, I've been now averaging 100 miles a week of running for decades, except when injured or ill. I clean my own home. I have business I run, it's full time. I have to be in shape, because it's a physical job. Besides, on the side I am as well a fighter... You know I have to run at midnight or two in the morning much because I want to be there for the kids. So, that's why i look like i do."

She appeared to not know what to say. So i added, "When you're ready to run a hundred miles a week let me know. It doesn't come without a price." I nodded. "I got to run now. Know that you already have the figure most women want. Take Care." And off I ran.

Years before,  before I became a fighter. A nurse who knew me said to me one day, "I'd never want to be you." I inquired, "Why would that be?" She replied, "The pain. It's too painful what you do. I don't get it." I replied, "I've never thought about the pain all that much.  But yes, there is pain in what i do. I don't focus solely on it, it's the process.  Its science I'm seeking." ---Jody-Lynn Reicher