Looking Back Now... It Was Tough For Him to Smile 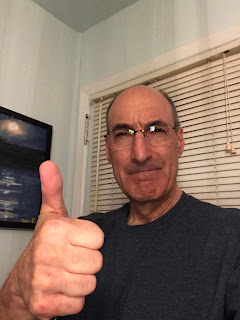 “I couldn’t believe you didn’t say anything. You just stood there, raised a brow and kept playing solitaire on your kindle.” He wondered.

I replied, “Well, no one is going to listen to me. Especially, when what I have to say will keep them from making millions of dollars off a desperate soul. So, I just dummy-up and let them think I’ve accepted their unscrupulousness. What are you gonna’ do. Huh?” I shrugged.

That was one of the many conversations I had after each visit my husband had, at what many consider a topnotch medical group in the ‘Big City’. They make millions on people’s desperation.  They won’t try and consider that maybe the patient doesn’t want to be throwing up, drugged up, unable to go outside for a walk, or unable to do certain chores. That medical group does harm. That big conglomerate violated the ‘Do No Harm’ efficacy of medicine. And it was blatant. Why? Because the majority believe in it. Are sold on it... So well, that it supersedes even their belief in God. Imagine that.

The topper was the delivery of the message in the final diagnosis. It wasn’t a gentle delivery.  It was an abusive, harsh delivery to an unsuspecting victim of a disease at its nearly most advanced stage. What was even more disturbing, was that here was the patient who had NOT neglected his health. As a matter of fact, he went for annual physicals quite regularly, eyes checked, teeth checked all regularly.  Even further, he was truly physically active, he’d been running two or miles a day since age seventeen and now here he was age sixty-three. And instead of going on cholesterol medication to lower his LDL cholesterol over a decade ago, he changed his diet and the cholesterol dropped seventy points in six weeks, by adding more greens into his diet. He felt better.

He changed his diet for his arthritis, went for acupuncture and was able to stave off hand surgery, indefinitely. He raked and used a hand mower to rake and mow our farmer’s acre, for nearly the past twenty-two years.  He would go months without a beer, and have an occasional beer or similar beverage randomly. He was the perfect BMI, weight and height for a man his size. As well, he had as our internist stated just a couple years before, “The lungs of a Baby Blue Whale”. Imagine that type of report. The man wasn’t on any medications.  He was constantly questioned on this. It was as if no one believed him, except our internist.

What this all says, is much of our allopathic field thinking is too OLD. Too RIGID. The dollar is part of what has driven it. The dollar has corrupted it. But, so have the people’s demands.  It isn’t necessarily the individuals working in the field that has driven this. It is the greed of the CEO’s, perhaps stockholders, and/or hospital board members. Yet MOST definitely, the unwillingness of the masses in our country to take responsibility for what they do or do not do with their bodies, as well too what they ingest. Add that to the unreasonable demand people have on the medical community of extending life beyond all rational possibilities. And what you get… is a royal cluster-fuck delivered back to the consumer, the patient, the impatient demanding people. We all suffer, from the greed and the feeling of entitled longevity, lacking faith in the process of living and dying. Most do NOT except that all of us have our own time that we must part from the earth in human form. It is either quietly, or loud. Yet, it many times is painful. And oh, how we abhor pain. We have pills for that. --- Jody-Lynn Reicher