Abandonment to Adaptation...his preliminary diagnosis what we can teach others a year later. 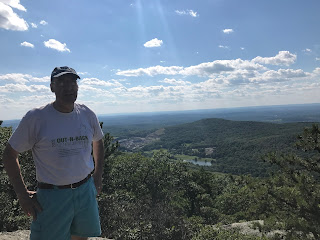 Part One… a year after his first preliminary diagnosis…what I gained.


So, this I knew the answer...
I knew my answer... for me on November 23rd, 2019. However, not theirs’...the children.
The question was, how were the children going to mourn another loss?  They never knew their biological parents...so now what? One of another set of parents was dying right before their eyes...


Recently, I explained this double to quadruple abandonment phenomena to a friend in the medical field and a couple relatives over phone conversations.  To some, it was to help them understand what their children were going through in this time of COVID when parents get divorced, move to a new town, and the like. Currently, there truly has been more of a hindrance because of COVID.

Parents must learn this.  Even parents of young adults in college. Very few young adults understand fully the ramifications of various forms of abandonment, and their effects on them and others. I’ve spoken with enough well-educated parents who were unaware of why their child may be acting out, appearing overly distracted when that was not an apparent problem before. It is due to how their world and ours has drastically changed. From what we perceived to be some certainty to almost none at all. Or perhaps, the certainty of struggle when the old struggles are replaced with others raising the bar on compartmentalizing, distinguishing action reaction, old lonely feelings to new.

My father-in-law Herbie used to say, "Stress, you can't live with it. You can't live without it."  I concur, truly stress can and will kill you. However, if you learn to adapt with each stressor, it may become and quite often can become the secret to your success. I'm no pro at this. Yet, others have inquired of me. My answer from reading books on abandonment before my husband and I adopted our first child, along with observations of our two daughters over time. What rang true, was that children want to know who they can trust.  Children want to know, ‘Will we still love them’? Are they loveable? Or, will we parents just leave with either little or no warning?

For adopted babies it is what is considered a, ‘primal wound’. As such, there is a book by that name. The wound runs deep in the child’s mind/soul. And I will venture to say, this too happens with children who’ve not been through adoption, yet one of their parents has died before they reach full physiological and psychological maturity in their twenties. Divorce too can do this, depending on the age of the child. The child themselves will most likely be unable to differentiate why they feel an abandonment, a feeling of betrayal. Or, perhaps why they did something out of the ordinary for them.

Twenty years ago, Tom Fleming my running coach who had dubbed me "The Rainman" in 1995, then five years later in the summer of 2000, he dubbed me "The Chameleon". Reason being, was I was willing myself to overcome nerve damage in my right leg since an incident in 1991. I refused to quit. When everyone thought I was down, I was up. Or so it seemed. I fake adaptation till I achieve it.  That is what I do. I started this game as a child. I knew I was always down... physically that is... as well as learning disabilities... yet, I have my mind, my soul and life sprinkled with a knowing of my higher Source. That's where mine began.

By age seven to eight I began to see the unfolding of how parents could NOT be there for a child. Once the child left the home to go play, go to school, you were now at the beck and call of the world's effects. How you handled them, meant your survival. The line I pressured into our two daughters early was, "If I can't see you, I can't save you."  I asked a friend who was in law enforcement way back about that saying.  He concurred it was true and should be said to children out and about. As much of seemingly a downer as the thought of betrayal goes with that above saying. Conversely, knowing the truth early may mean your and your child’s survival.  The other control we may have as parents is reversing negative thoughts, positive thoughts with prayer, and maintaining knowing your environment. And that takes work. It takes daily, sometimes hourly practice in some days. ---Jody-Lynn Reicher