It's Hard to Be Brave 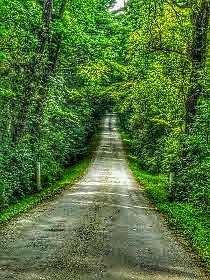 It’s Hard to be Brave…

As I wake our children up before work, before writing, before training and before their school, it’s hard to be brave. I’ve learned in life most people aren’t brave.  I learned it early in life, and I’ve learned why it is hard to be brave. I knew it instinctively. As if I were born to reckon with it. I can recall the very first memory of visual fear, it was on a sunny, summer, late afternoon July 1966. I wasn’t quite four years old yet, but I had a sudden sense of fear. I looked on as two of my family members in front of another family member who appeared to have no fear presented. An act he thought was presenting bravery.  Yet, his act was nearing a point of bullying. And to anyone else, it may not have been seen this way. But I knew it even at that young age of not quite four. As I recall this particular day then; I realize his appearance of bravery arrived out of thinking he had control.  And if he didn’t have control, he controlled others with his fear. His bullying appeared as if it were bravery. Now speaking my mind, I’ll move forward into current events of today.

As perhaps I may turn the tables on you, the reader. One day last year, my husband and I stood in our kitchen together.  I stood there, coffee in hand contemplating the meals I would begin to start cooking for the week ahead. Naturally, in our kitchen we would privately touch upon political goings on. But you see, they aren’t the local ones regularly; once in a while the state politics. But of course, the national politics come to light swiftly. However, even just as important are the politics and human beings living in the world today.  That is what I bring up and contemplate along with other thoughts throughout the day in my car alone. In between work, training, children, and well there, is always a political world edge in my fiction books.

As I commented to my husband, “These people just don’t get it. So, you’re in Honduras, you want to escape domestic violence, gang violence, government corruption withholding your freedoms.  You want your kids to have it better.  So now, you’ve got to put in a request for asylum in Mexico, then be turned down by the Mexican government. You know what’s going on. You now know that the cartels know who you are.  Basically, mostly, you’re screwed, and so, are your children. You’re in Hong Kong, you’ve have had basic freedoms over the decades. But wait, now it’s being diminished. It’s like rapid fire. The greed of the world has thrown you into this abyss. The people find fault because with the protests, as they have become violent. Yet, some of those finding fault aren’t even there.  The fault finders never visited Hong Kong, let alone followed its politics, nor have they read up on how Hong Kong’s political situation actually came to be.  Yet they criticize as young people protest risking the likelihood that they will be imprisoned or worse yet, murdered. Then in some countries, mutaa marriage, also known as a ‘marriage of convenience’. Convenience to the men of course, some wanting to marry girls as young as age thirteen or even age nine. Going on further, the sex-trafficking which we’ve helped in our country aid and abet. The answer is greed and corruption. I see people on social media post something that they haven’t even read the date, let alone the first two sentences of the article they are posting. So, it appears that they aren’t the type of people to think globally.” I know the truth is hard to swallow. Because you must be brave to swallow the truth, learn it, know it and face it.  It’s hard to be brave.

It’s Hard to be Brave Part 2

Sometimes, we turn off the radio, the news, etc… in the car.  Well, actually for me it is about seventy percent of the time while I drive, sometimes more. There is no radio on, allowing the slight sound of a truck passing by on the highway may be heard, along with one’s own thoughts. When I go to bed, I know tomorrow may never come.  I’ve lived this way, seemingly most of my life. I still dream. I dream so that if and when tomorrow arrives I become more noble, effecting people to want to live better.

Why?  Because I can correct the wrongs done by people, albeit a little vigilantism goes a long way in my fiction book writing. It’s the way I think the world should operate on some level.  It is because as my husband had at times called me, ‘cave woman’. I don’t find it derogatory, because I know he understands the pure disgust I have in people ignoring others’ plights. It goes so far as an acquaintance remarked about twenty-seven years ago to me. On a cloudy day in the autumn of 1992. We were in his office. He knew I was in physical pain. Yet, the emotional pain and drain I was dealing with, he could not understand why I helped people regardless of my own predicaments. But he said, “…you came through for others when you’re at your lowest points…How…?” I commented, “Because helping others takes away my fear. I cannot always regard my pains when others are suffering.” Caring about and for others gives you strength. My caring has been there since I can remember. And that is how I do what I have done and what I do currently. Even when it’s hard to be brave, you know others have it much worse.---Jody-Lynn Reicher