Till Death Do Us Part... And Then Some 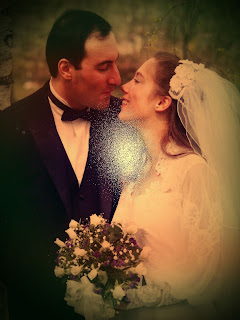 My point being, is that a high percentage of us adults in America have either been married, or have gone to a wedding, or our parents were or are currently married. Marriage is something that most of us somehow can relate to as adults. That being said. The old-fashioned wedding vows of ‘till death do us part’, it appears that no one seems to always truly understand what that all means.  And I don’t just mean by today’s standards. I mean since some form of we humans have walked the face of the earth. Like ohhhhh, the last fifty thousand years.

When there is a relationship such committed as a marriage between two people, it’s work. It’s daily work. No matter how you agree, there is always something you won’t agree on, and that’s normal. If there weren’t those differences, big or little there would be no way to bond, other than let’s say consummating. Consummation is NOT the glue that holds the marriage together. Especially, as we get busier perhaps with children, and or the caregiving of either our relatives or our spouses and the like. Never mind having chores and or working full-time, paying bills, as well.

With being in a marriage to another human being, no matter who, what religion, what culture, what economic status, nor education, it should be about devotion. Devotion to the degree that there is an unwritten willing compromise between those two individuals in their relationship. The spouse is the person who hopefully knows you best. When you hurt, they hurt.  When they hurt, you hurt. Yet, when they hurt, you can bring them to a level beyond hope. You can be real with them. Yet, perhaps you are their sunshine in the clouds.  You as the spouse are the emphatic silver lining in the clouds. They hold your hand in times when you need someone to lean on.  And you hold their hand in times when they need someone to lean on.

My now deceased husband and I had been through all those stats previously posted in the first paragraph here, and then some. Yes, most people go through two of those stats or similar ones together before they finish a marriage of thirty years or more. We made thirty-six years of marriage plus. And in saying that, you never know what is around the corner. You just hope and pray that you both can ride the wave with each other, in whatever the other needs support in. And when you have children, it shouldn’t change. It is still ‘till death do us part’.

In the end, there will always be divides, crevasses and the like in a marriage. But hopefully, eventually those crevasses are sewn together.  As well at the right time. Because true love is stronger than the quicksand of the abyss of chaos of not having such a complete bond in a marriage.---Jody-Lynn Reicher