"Thy Beasts and Singing Birds..." 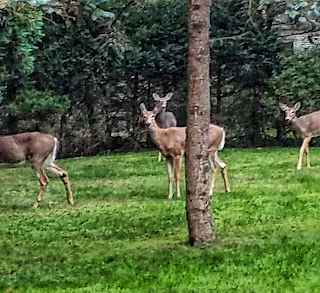 Thy Beasts and Singing Birds…

This morning I was out for a run. I was miles from home. As I ran, I said prayers. I thought happy thoughts that meandered in and out of my soul.  As well a line from a song was playing in my head, whilst I ran. Then at about midway through my run, as I was discovering some new roads. An old prayer came to my lips. It is one I’ve said for animals either injured, alone or in general. I had no real reason to know of what made me say this prayer three times. But it occurred into my soul and out through my lips. I whispered it as I ran.  Too, a picture of a deer in my backyard came to mind. At the time I thought nothing of it. I wondered only for a second what made me think of the prayer and say it seemingly at a whim.

Miles later, I arrived home from my run. I had gotten unusually chilled on my cooldown walk. So, I decided not to go into our backyard where our chin-up bar stood. Instead, I entered our front door, and placed some of my gear down on the counter that I had carried with me. I took off my hat. I went upstairs to check up on my husband and one of our children who’d just gotten home from work.

When I arrived upstairs and spoke with my husband, I looked out our bedroom window.  Upon doing so, there I saw a huge doe, alone.  She appeared to be laying down. Yet, something didn’t seem right. I mentioned it to my husband.  I decided to see if I could see her move, yet I didn’t want to disturb her. I feared she may be having an issue with her pregnancy.  So, I knew instinctively not to enter the backyard and not to let anyone enter our yard either.

I headed downstairs to film and picture her from our backdoor.  I did everything with silence.  She didn’t hear me nearly half an acre away. Something seemed wrong.  I expressed to our youngest and to my husband. I saw other signs of distress. I then called our local animal hospital.  I got a wildlife specialist on the phone.  She knew who I was. She has known our pets.

Her name was Donna. She said, “You did the right thing. Don’t disturb her.  Sounds like you’re pretty in touch with animals. Film her. To monitor.”
I replied, “I did film her from afar and took pictures. I try to be respectful. I do love them so much.”
Donna responded, “Sounds like you do.”
I remarked, “You ready for something weird?” I paused. Then continued, “For some crazy reason I started saying this old Lutheran prayer I learned when I was four years old.  I say it now and then when I know or feel an animal is in distress.”
Donna commented, “It’s because you’re so intuitive with nature.”
I recalled, “So, I start saying this prayer three times while I’m out running. I said it, while I was like eight miles from our home. I couldn’t figure it. So, I just said it, as if I knew an animal was in distress. Weird? Huh?” I continued, “Even funnier yet. Before I went for my morning run, I looked out our kitchen window. And there were two deer grazing in our backyard on the grass. One looked up looking right at me. They were about a half-acre away from me through our kitchen window, which was closed.  It was like she knew I was there.
Donna responded, “They really trust you. It’s like you know each other. Just so you know, our rehab guy is on his way in.  He has to pick up an injured red-hawk and some newborn squirrels and a baby bunny. Feel free to call us on the situation if it doesn’t seem better.”
I replied, “Will do. Thank you.

Just a minute before, my husband notices a group deer in the woods fifteen feet from her, now all resting. I informed Donna of that before we’d gotten off the phone together.  It was a good sign.  We then said our good-byes.

What happened next, was a miracle. Not a minute later after hanging up the phone, the doe got up and walked into the woods.  My thoughts were, ‘She could’ve been clipped by a car. Yet, not fully injured and needed to rest to regain her composure.’ Donna had mentioned that scenario to me.  However, I marvel at the fact that I am so in touch with this herd of deer that I could sense their distress in Spirit so many miles away. I feel honored to know I am part of ‘Thy beasts and singing birds…’ world.---Jody-Lynn Reicher
https://www.amazon.com/Jody-Lynn-Reicher/e/B00R3VUZ18/ref=sr_ntt_srch_lnk_10?qid=1418802234&sr=1-10