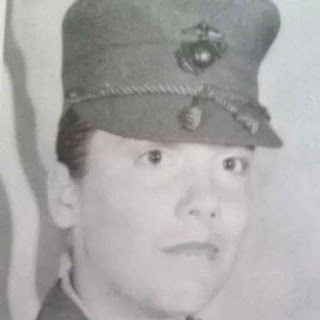 As I was speaking with one of my young clients. Who is nearly a quarter of a century younger than I. We were discussing different areas of the country. He remarked, “We do live in a bubble around here.” I concurred. Then I asked him, “Did you ever see ‘Deliverance’, the movie?”  He replied, “No.” Then the story I’d told maybe to one or two people in my life. I began to tell to him this story.

So, here I was fresh out of Marine Corps bootcamp. I was eighteen. I’d just graduated that day from being a recruit to becoming a Marine in Parris Island, South Carolina. The first base I was assigned to was in Fayetteville, North Carolina. I had to take a bus there. It was a fifteen hour ride. Yes, you heard me. A fifteen hour bus ride.

I was in full uniform for April 15th. Anyone having military service, knows what that date actually means. I do believe that the same uniform rules still apply to this day. When I left Parris Island and got on this bus in Beaufort, South Carolina for the first time in many weeks besides graduation, I was surrounded by civilians. There were no other people dressed in military on this bus. There were men and women, all adults present on the bus. The stares I got were unprecedented.

The stares, Oh. Because I was a woman. I was a Marine that was a woman with long hair tightly wrapped into a bun, no pins showing. Yet, my uniform was of a feminine nature, skirt, cover, stockings and a tailored shirt appearing to show what little chest and waist I had. I wore lipstick to match the cord of my cover. Yet, it blended in with my olive colored skin tone. That was by the order of the Marine Corps, in that format of their uniform.

Before I took my seat on the bus there were, ‘Ohhhs’. And there were ‘Thank yous’. There also were the silent stares. Yes, there was silence. As in shocked. That was nearly forty years ago. So, here I was on this long bus ride. I cannot remember the exact time I’d boarded the bus, it was daytime then.  That I knew. We drove through South and North Carolina. As I rode on the bus, I saw quite a few shacks. Places where the very poor lived in and around cities. Things I’d not seen in such an abundance before in my life,  in real time. As well, though I had a clue who lived there. I had a clue what their lives might have been like. I knew I was lucky, because I was one measure up from being there as a child.

Now the reason why I may have been one measure up from being there. It was not only what state I was born in, and the area of that state. It was as well that my parents were not immigrants. As well I recognized I was Caucasian. I knew those two things of not sounding or looking different meant quite a bit as to where I landed in my life. As well I don’t have an ethnic look, also a benefit in this country. Yet, a draw back in being a woman back then. However, my benefit as I was in uniform.

All that stated above did and does matter even now in life. What happened on my last bus stop at two in the morning, was the shocker. Here I was all alone on an empty bus. We soon arrived in Fayetteville, North Carolina. We drove into this city like area, apparently a red-light district. An area where the Marine Corps, I found out later didn’t want us Marines to go.

It was dark, appearing a seedy  section of a town. The bus driver opened the door. As he did this he said, “They’ll be a little loud. Don’t worry.” I knew. I braced myself. I put up my guard, not knowing what was to arrive next. I was ashamed that I felt fear. Yet, I’ve always had a pretty good poker-face. Within seconds, bukoo men in civilian clothing boarded. They were wild. Most if not all were drunk. There were so many guys that boarded the bus, it appeared there was not enough seats. Soon the bus driver closed the door. He announced to them over the speaker to lower it a little.

I sat perfect posture, keeping watch for any man eyeing me inappropriately. I’d give him the ‘death-look’, my husband tells me now I do that so well. It’s like I’m looking through you, yet I’m killing you at the same time. I’ve chased young men smoking, out of a movie theatre with that look. It’s all I had that evening. Besides mindful prayer.

As the men continued to gamble, shooting craps in the back of the bus. They hollered and scolded one another.  Yet, there were no fist fights there. Soon the bus stopped. We had entered Camp LeJeune. The base I was designated to for further training. This one stop was the only stop. It was about a mile or so from the barracks I was actually designated to check into and be at. I got off the bus. All the men except one short well-built man got out of the bus and as the rest ran off to their respective areas.

This one guy who looked infantry. He took a look at me as the bus driver had gotten out and picked up my government issue olive green duffle bag and unloaded it from out of the bus.  The infantry guy was eyeing me. He wore government issued glasses. I wondered why he stood there looking at me. I said nothing, except ‘Thank you’ to the bus driver.

The infantry guy waved and said good-bye to the bus driver as if they’d known each other all their lives.

Here was this man who carried all my belongings. He and I walked together for a good twenty minutes together at about half past two in the morning. We chatted. Although I maintained keeping my guard up. He felt like an old friend. This man, who was in infantry made certain I got to the barracks I needed to be checked into. We said ‘Good-bye’. To this day, every so often I see his face and that night in my mind’s eye.---Jody-Lynn Reicher
https://www.amazon.com/gp/product/1503237516/ref=dbs_a_def_rwt_hsch_vapi_taft_p1_i10