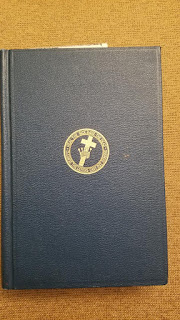 Before I was born, there was a woman on my Dad’s side of the family. I didn’t hear her name until one day, when I overheard my parents talking in a room nearby. I was eight at the time. This woman was Aunt Grace. So, the story I heard goes. This brought me to the thoughts I had when I awoke this morning. The thing that disturbed my parents about me at age eight was my faith. It wasn’t like theirs.  And the only person that they could compare it to, was this woman in my Dad’s life till 1962, Aunt Grace.

My Dad’s Aunt Grace was a Christian Science Practitioner. I was born after she’d died that same year. No one I knew fifty years ago ever read the Bible. Nor spoke about doing so on any regular basis. People went to church, and that was that.  My maternal grandmother said one day about church to me, “…When mass was in Latin. He could’ve been selling us a basket of bread. And I wouldn’t have known the difference…”

Meanwhile, I was praying and imagining miracles, hopes and dreams long before I was age eight. I started reading the Bible privately, long before then too. It was the only thing I was interested in reading. As well, it appeared the right structure and font for my dyslexia and reading comprehension issues as well. Issues I still struggle with to this day.

What had prompted this, was I realized before age eight that humans couldn’t control most things. It was alright with me, for a few reasons. One being, I knew God and well, he knew me. That has been the one thing I was sure of. The other thing was that human beings erred more than we want to admit. And that included people with tons of letters after their names. No matter the career that they had embedded themselves in.

So, on this particular day, now nearly fifty years ago. I did something that blew my parent’s minds. I had faith. Like real out there, outer space faith. Kind of sort of, unheard of faith.  I’d seen enough people panic when others they knew were dying. Then they’d pray, light a candle, go to church, talk to their pastor, and well you know. However, the rest of their daily lives, they went about their business as if death didn’t or wasn’t supposed to exist. That to die was the most tragic thing. I decided it might not be.  It all depended on a lot of things. Mainly what people and things meant to you. I can admit I’ve felt sad when someone died.  Yet. I’ve felt even more devastated when people are cruel to one another.  When people lie to one another. When people bully others. Or arrogantly belittle other people’s experiences.  Those aforementioned circumstances are the MOST devastating things that can and do happen in our sphere of being human.

So, here I was at age eight, when my parents discovered that I believed I could pray, perhaps read the Bible and get well from illness. It was one day at age eight, I’d come home for lunch from elementary school. I felt ill. It was my stomach.  Before I’d arrived home, my mother had made me a peanut butter and jelly sandwich and poured me a glass of milk. It was on our kitchen table when I entered our home.

I looked at it and said, “Mom, I don’t feel good.”
She replied, “How about some Pepto-Bismal?”
I replied, “Mom, I’ll be fine in twenty minutes.
I’m going to go upstairs and talk to God.”
She didn’t know what to say. I added, “I’ll be fine.”

I went up the flight of thirteen steps, then towards my bedroom. I went in closing my bedroom door behind me. I then grabbed my children’s Bible and laid on my back in my bed. Praying as I did to find the right pages to read to get myself all better. I found three stories. Two of them rang true to my soul in its current position. Twenty minutes later I was all better. I came downstairs, had half of my lunch. Said ‘good-bye’ to my mother and back to school I went.

That evening I overheard my parents talking. I heard my name.

“Where did she come up with stuff?” I heard my Dad’s voice
query my mother.
Mom answered him, “I don’t know.” She sounded a bit
bewildered.
Then my Dad came back with, “Well, we had my Aunt Grace.
But Jody never met her.”
My Mom responded, “Oh she was a Christian Science practitioner…”

I had no clue what all that was. But I didn’t forget it. About a year or two later, Aunt Grace’s name came up at our dinner table with our family of four at the time sitting there, having dinner together. I found out then who Aunt Grace was. I found out that when my Dad’s finger as a child was to be amputated the next morning, Aunt Grace came over the evening before, prayed with the family. And the next morning the finger was healed. Then he had polio and was not expected to walk again. Again, Aunt Grace showed up, prayed, and he was healed again. My Dad’s father had bouts of boils that wouldn’t relent. No one and nothing could soothe him, nor get rid of his boils.  Doctors were baffled by it. Aunt Grace found out about Gramp’s boils and well…came over to their home, and prayed with them. The next morning not only were the boils and their effects gone. Yet, as well Gramp never had an episode of boils ever again.

So, fast forward I’m working in my office its about 2005.  An elderly couple arrive, sent in by a doctor for me to treat the wife.  The couple was eighty-five years old. The husband looked twenty years younger than he actually was. But he was worried about his wife of over sixty years. I treated her.  She had many maladies and was in pain. Her and I hit it off. I found out that she was an Orthodox Jew. Next what I found out was she had studied Christian Science. She was the only person in my life that I’d ever met who’d discussed it with me. And before her last session with me, she gave me The Book.---Jody-Lynn Reicher
https://www.amazon.com/Jody-Lynn-Reicher/e/B00R3VUZ18/ref=sr_ntt_srch_lnk_10?qid=1418802234&sr=1-10