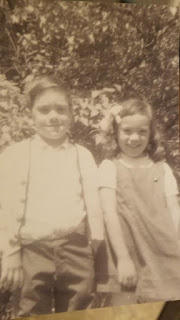 Oh Jack!
It was around the summer of 1971, before my ninth birthday.  My older brother, Don was feeling his oats as a young ten year old boy would. Many things he did, since I was many times his partner in … well only certain crimes. We didn’t tell not only NOT Mom.  We didn’t tell NOBODY, what we were up to.

That summer I pestered him about he and his buddies new club house.  He banned me from knowing where it was and from seeing it. I was pissed. We climbed trees together, throwing rocks at each other (never got hurt, so Mom didn’t know.), but we made sure we didn’t argue in front of Mom. Mom liked peace and quiet.  She more or less demanded it. So, we took it outside, sun, rain, snow, and if Mom let us, even in ice storms. We had a rule though. “Don’t leave any marks Mom can see… Even if we took damage.” It was an unspoken code.  No matter how badly we retaliated against each other, Mom never knew.

So, this particular  summer, Don was being a bit of a turkey. I nagged him about the tree house he and a few of his buddies said it was the ‘coolest ever’.   Finally, one day my brother made me a deal and of course a promise, “Never tell Mom that you had to beat up Jack, the town bully to see the tree house.” I went through the swearing in ritual.  The crossing of the heart and “…hope to die.” Never Tell Mom Ritual. So, Don set up the day.  It was on a sunny late July afternoon on the southwest side of B.F. Gibbs school, by the big tree where we would do ramp jumping (another thing we hid from Mom).

The day came, it was about three or so in the afternoon, nearly not a cloud in the sky. I showed up. Then Don showed up.  Then a few minutes later Jack, the town bully showed up.  Jack was about six months older than Don. Yet Jack was in the grade behind him. Most kids were afraid of Jack. I have no clue what kind of deal my brother, Don who was way smaller than Jack cooked up with him. Jack evidently temporarily had become my brother’s hitman. Well, actually only for the house painting job on me.  If you know what I mean.

So, here we are the three of us. Jack inquires of my brother, “Her?” With his red hair and freckles taking a look-see over to Don.  Don replies, “Yeah.  That’s her. Go ahead.” Basically, he was to land a solid punch on me. The bet was if I didn’t fight and win. Well then, I couldn’t see the guys tree house. Cause that meant I was a REAL GIRL. And wanted none of that near their tree house.

So, Jack looks at me and says, “You throw the first punch.”
I replied, “My Daddy said, I can’t start a fight. ‘Cause its not right.”
Jack responds, “I don’t know.”  He shakes his head in shame for having
to punch a girl, let alone one younger and much smaller than he.
I look at my brother and say, “Right?” My brother agrees with me, with
a nod. I continue, “Jack, you gotta' throw the first punch. ‘Cause my
Daddy will get mad at me if I do.”
Jack shrugs, “Okay.”

Jack throws a punch. I duck. I pop up and throw a kick with my Thom McCann High Top Work boots on. You know the ones with the tough edge surrounding the work shoes? Well, that landed.  As well, landing straight on Jack’s left lower patellar tendon, or  there abouts. Jack falls to the ground in agony, holding his left knee. Blood is pouring from his knee area. Jack in agony rolling on the ground holding his left knee.

I look at my brother in terror, then at Jack and yell, “Oh! Jack!!!!!”
My brother looks at me with terror in his eyes, like we just killed
someone. He yells, “RUUUUUUN!!!!!! RUUUUUUUN!!!” Apparently, we
both thought Jack was bleeding to death.

Well no one died.  But Jack stayed away from me and I don’t remember him picking on anyone we knew, after that. Wait. It gets better.

Within in the next week, my brother reneges on the promise. We have HUGE thunderstorm one day that week. The following day our home phone rings, Mom picks up. We’re in the kitchen. Mom’s expression, eye brows raised, eyes get real big, “Oh Dear. Oh, Thank God.”  She Thanks the other mother on the end of the phone and then says good-bye. I figure, I’m doomed. My heart sinks. Then we hear aimed at my brother, “Young Man. What you and those boys did was deadly.” Okay this had nothing to do with me.

So, as the story goes my brother and a few of his buddies built the treehouse under a HUGE TREE. It collapsed onto all what they had in there due to the storm. The mothers found out about it. The HUGE tree had already been uprooted and it well could have fallen on top of them even without the storm. In the end no one was hurt.  But somebody was in trouble and it wasn’t me.---Jody-Lynn Reicher
https://www.amazon.com/Jody-Lynn-Reicher/e/B00R3VUZ18/ref=sr_ntt_srch_lnk_10?qid=1418802234&sr=1-10