"I Write the Songs" 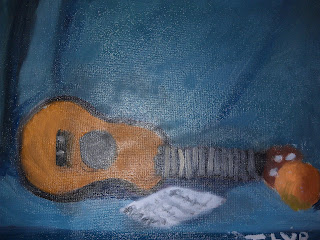 I Write the Songs…
A story I’ve told some. To this day it is story that I am fascinated by.  There are those times in your life when you feel you have nothing to offer to life. You wonder, ‘where’s your talent?’ I do that a lot.  I know I can work anywhere. I can last with my mental drive and endurance.  That I know.  But I know that is not a talent.
Yet, I know somewhere in my essence I must have a little piece of talent in the arts.  No, not the martial arts.  The music, painting, drawing, and writing type arts, I’m talking about. Our youngest daughter has it. However, she’s adopted. My brother had it. My sister has it.  Her kids have it. You know where it comes from? I think I do. I’ll tell you a story and let you figure it out.
One day in early 1975, my Dad came home with this big blue case, with brass buckles enclosing with what was inside of it. He rested it down on our living room chair that afternoon.  The sunshine reflected and peered through the pantry windows, through our tiny kitchen. And then into the back end of our living room.
My Mom asked, “What’s this?”
Dad replied, “It’s for you.  This guy…” He begins to unfasten the brass buckles of the blue case. He continues, “…was throwing this accordion out.  And at first, there was no case with it. It was sitting on the side of the road by the curb.”
My Mom looked at the accordion. Dad added, “He said one key is broken off.  Another is a little too low and well. He saw me taking the accordion off the curb and called to me from his front door.  He offered me the case.” He shrugged.
I asked, “Mom, can you still play it?”
She steadied her eyes on the accordion. Put her right hand to her chin. “Yeah. But I haven’t played an accordion since I was sixteen.”

My heart sunk a little, for my mother was now age thirty-five. I thought that to be quite a number of years of passing with no practice.  Especially, when I knew my brother practiced his clarinet every day for the last five years and the guitar most days for the past six years. He was diligent with practicing. He wanted to be a star.
My Mom then suddenly picked up the accordion out of its case. Put the straps of the instrument over her shoulders, and sat down. She sat there for about three minutes checking the air, the buttons, the keys, and the movement of the accordion. She made music.  It was an old type of tune.
Then she said, “Jody, put the radio on.” I did. It was tuned to an oldies and pop station CBS-FM.
Soon, after I turned it on and tuned the radio in with no static, a song by Barry Manilow played. It was “I Write the Songs”. It was a new song, that we’d just became familiar with. After it played on the radio, my mother said, “Okay shut it off.”  I turned off the radio.  Mom sat there and played the whole song on the accordion, as she sung the words to “I Write the Songs”. It was so fascinating. Mom commented after she was done, “Not so bad.”  She meant the shape of the old accordion.

To this day, my mind remains blown by that day with the accordion. My mother had other talents.  She was a cosmetician. She could run circles around people with Algebraic equations.  Her ability to learn and use a foreign language such as Spanish was quite incredible.  Her English skills and penmanship were insane.  I know her IQ must’ve been high.  My mother could read forever. It was amazing to watch her. ---Jody-Lynn Reicher
https://www.amazon.com/Jody-Lynn-Reicher/e/B00R3VUZ18/ref=sr_ntt_srch_lnk_10?qid=1418802234&sr=1-10