Let’s Go to the Video Tape.”
Over the years, I’ve pictured God with some kind of video camera on everyone. So that, when we die we are perhaps in limbo. Unless we’ve made it to sainthood. Otherwise, we are sat down in a sort of movie theatre atmosphere. However, it’s just you and your Maker. He takes a look at you, he knows who you are. Then remarks, “Let’s go to the video tape”. And you thought Warner Wolf, the sportscaster invented that saying.
After that is said. Well, there’s no turning back now. Remember the time you were in the privacy of your bathroom of your own home and you took the Lord’s name in vain?  Yeah, that time.  Don’t worry, it’s all there. God’s got it covered. God invented HSAM (Highly Superior Autobiographical Memory). The Good, The Bad and the Ugly, He made that up too. Then the showing of the video is like some type of warp speed through your life.  Time has been altered in the context of this state of being in limbo, in an apparent alternate universe, that we know nothing about.
So now, here you are awaiting your eternal fate.  But you see, you could have played the game of Life differently. Maybe. Every day, I look back at the lessons I’ve learned from others by observing them. For whatever reason, I decided to be more like my Mom’s personality than my Dad’s. I chose kindness over having to be right. Everyone plays it differently. My father-in-law, Herbie played nice in life. He was a bit like my mother in his diplomacy and kind ways. He had a picture of Vince Lombardi in his CPA office with the old article, “What it Takes to be Number One” sealed in a glass and wood frame. It reminded me, every time I saw it in the nearly six years that I knew Herbie, before his untimely death in 1987, that ‘It’s How You Play the Game… That is…The Game of Life’. Herbie was like the father I never had. His hugs were awesome. I still cherish that love, those hugs to this day.
By now our children have heard me feel bad for them when their team or they lose in sporting events. Yet I do not get upset if they lose an eight hundred meter run, a throw, a match in tennis or wrestling match, nor a Volleyball game. They may get upset, but I won’t. For me, it has been a question of, did they learn something about themselves and others?  I can say after I’ve raced over five hundred running events, and participated in one hundred-twenty ground fights, boxing matches, MMA matches and the like, it was my performance I have been most focused on. If my performance is not my best, that is when I’m most disappointed. The one area that has been my best that coaches over the past fifty years have pointed out to me in sports, is my good and even sometimes over the top sportsman-like conduct.  That is what comes easiest to me. I believe it is probably the most important aspect of being an athlete, besides being disciplined in training.
Sportsman-like conduct is a reflection of how one will react in life to life’s situations that will indeed throw you a curve.  Playing sports is a microcosm of Life. How you play the game(s). If you truly do your best, no matter the outcome. In the end as you age and your days become shortened, more than likely you will not feel, nor be disappointed about Life. You will not feel totally gipped in the end.
It does not matter how long you live, to a degree.  We think it does. We are sorely mistaken. It is what did you do with those days you were given? What did you do to increase the quality of the Life handed to you?  When you made a mistake in diet and or exercise, did you admit your error, and rectify your mistake? Or did you blame Life? Think about this, perhaps, blaming Life as being quite unconscionable.
Recently, I heard a medical specialist who should know better, claim that diet and exercise have nothing to do with helping increase one’s quality of life and life expectancy.  Yes, a man considered well-qualified as a medical doctor expressed that nutrition has nothing to do with life expectancy, especially if you are diseased. So, my being me, I googled that ideology.  Well, I don’t think three major medical outlets, such as John Hopkins, etc… could be wrong. Those medical facilities stated clearly that keeping one’s general health (which would be affected by nutrition, exercise, etc…) including and especially mental attitude was relevant to a diseased person’s life expectancy even if the patient is terminally ill. It could extend their life. As well they stated their mental attitude could extend the patient’s life expectancy in even such dire medical circumstances as Stage IV cancer.  Think about how amazing that is.  So, as much as Life has Her way with us.  We have the reigns of our Life in our hands.  And it is what we choose to do with them that could extend our Life, and may give us not just more time here on earth, but as well more quality to our Life in it’s current form here on earth.---Jody-Lynn Reicher 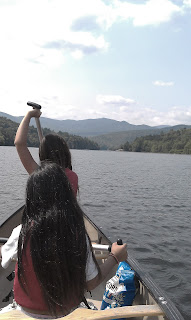