November 28, 2019
DUUUUUUUUCK!!!!!!!!!!!!!!!!!!!
On my fifteenth birthday in October 1977, my Mother went into the hospital.  We really didn’t know when she would return. I knew how sick she was, and my Dad had just found out.  He was a man who really didn’t pay attention to much outside of himself. My Mom was reserved, conservative and quiet. Often unassuming.  By age eleven, I was my Mom’s confidant.  I heard everything.  I listened, prayed and gave advice quietly to my Mom. There were three of us children in the family. My brother two years my senior and my sister thirteen and a half years my junior.  I was the ‘built-in’ babysitter as Mom said it.

Since my brother and I had school and some extra curricular activities after school, my Dad got my parent’s Accountant, Jack Shea’s wife to watch after my little sister who was aged eighteen months at the time. I would otherwise clean, cook and care for my little sister before and after school. About four weeks after my mother had been admitted into the hospital.  She was granted leave for a few hours to have a quiet Thanksgiving home with just us, so her family of five could be together.

Soon arrived Thanksgiving morning. It was a breezy, sunny, November day. Dad would demand lamb on Thanksgiving.  He claimed that he was just too Irish and Scottish to eat Turkey, and that’s another story for another time. So here it was, Dad was to pick up Mom at about three in the afternoon and get her back to the hospital by six that evening, after a somewhat early dinner. Before he picked up Mom, he wondered what Thanksgiving would be. What we could make and serve to create our own form of Thanksgiving. Upon these thoughts, he said, “Well Jo, I got to go pay Jack Shea.  We’ll figure something out.” My brother was still asleep, and I was caring for our little sister.
The Shea’s living near Sunset Boulevard, an area known as White Beeches. And so, goes our dinner.

The two men, Jack and my Dad stood looking out onto Sunset Boulevard talking. Next what occurs, is beyond ridiculous.  It is actually quite miraculous. Three white pond ducks are walking across Sunset Boulevard. And yes, as luck would have it, a vehicle was speeding on the already quite swift forty-five mile per hour pine tree lined roadway. It must’ve been doing close to sixty miles per hour.  As it sped, it cleanly sheared off the three adult white pond duck’s heads as they were crossing the middle of its lane.

My Dad just got done telling Jack he was at a loss for dinner.  Dad ran out into the middle of the street, yelling to Jack, “I got dinner!” Jack thought my Dad was nuts at first; then he saw the duck’s bodies were in very good shape. Jack’s wife heard the commotion, which she thought the whole thing was atrocious. Yet, Mrs. Shea kindly retrieved old newspapers for my Dad to wrap the duck’s bodies in.  Dad arrives home, it’s just before noon. He orders me to get him a brown paper bag and more newspapers. Without my asking, Dad says, “We’re having duck for Thanksgiving. Shea’s are getting one.  I promised them.  I got three ducks to clean.”

As my Dad knelt outside at the end of the driveway by the garden, feathers flew everywhere as he plucked and gutted with fury, like I’d never seen a man do in my life.  One thing I knew.  He knew what he was doing.  He was happy. Dad loved duck and he knew how to cook wild game. I figured out what frozen vegetables we could use, made a crudité, mashed potatoes, Dad made the duck and a sweetened gravy for the duck. He got Mom on time, brought her home for a couple hours and got her back on time after the five of us had dinner.

It’s funny as I write this now, this morning my husband and I lay in bed listening to the wind howl outside before we started our day. I told him two other stories that he hadn’t been aware of. All though this story wasn’t one of them. It is one I will remember for its uniqueness. And for the fact that I felt at peace, in the middle of all that uncertainty. Now that’s a miracle.---Jody-Lynn Reicher 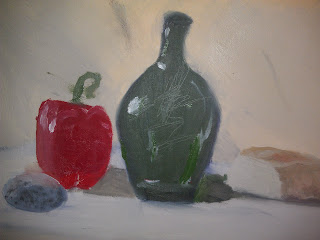