Introduction of "Therapy On the Run" 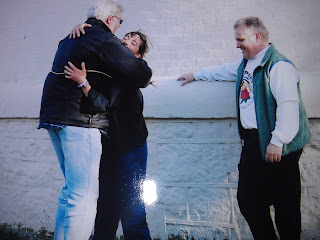 From about 1999 through 2010, Caytha Jentis and I would try to get together for a run or two about every seven to ten days.  Many were short runs due to her busy schedule of those days.  Caytha’s workload was jam-packed.
Caytha was the more dynamic of the two of us.  Caytha really being more of a social otter than I. Running together was our form of going out for coffee.  Caytha, a well-educated woman, who had taught in Los Angeles, California, that was way back before we had ever met.  Also she’d had a background in writing/production as she worked for a Bergen County newspaper and for the show Sesame Street which airs on PBS (Public Broadcasting Station).
At the time Caytha, being a working mother of two school-aged children, a house wife, and training the family dogs, Buster and Stewie.   Caytha didn’t dabble.  Stewie, was probably the best trained dog I’d ever encountered in my entire life.   We’d be outside running together, Stewie kept perfect pace with us as we ran.  When he’d want to go ahead, he would, but then would stop at an intersection at the “Stop” sign, and wait for us.  Buster, a new rescue dog needed much work yet.
As was the norm, I would call Caytha up either on a Saturday morning at about quarter to eight in the morning or during the week after eight-thirty, after she had gotten the children off to school.  I would do this usually as I was finishing up the last miles of my night running of forty to seventy miles or about to do a second morning run before I became a parent.
I wanted Caytha to drag me through the last four to five torturous miles of my ultra-distance run, or what would be my second or third shorter run of the day.  This was to keep me honest in putting out the miles in a better than a ‘Bataan Death March’ pace.
Caytha, many times was working on her free-lance writings, creating plays, writing screenplays for movies in hopes to someday becoming a producer.  I would listen to Caytha tell her stories, she was currently working on, and the ideas she had.  At times I knew she was processing things through her creative mind as we ran together.
Caytha would blurt them out to me and then later say, “Don’t tell anyone what I’m working on.”  I never did. I felt honoured that she confided her story ideas to me.  Her rapid fire level of creativity fascinated me.  And also it appeared to me Caytha had an unprecedented level of supersonic speed of thought, when it came to being creative.
Much of our runs I’d remain silent, taking in her creativity, and hearing about her children and thoughts on parenting.  As her children finished up college mine were just entering junior high.  By then she’d become so successful, she now ambled back and forth between Hollywood and New York City…the big town.
One day Caytha and I were running in 2003. It was before I became a mother.  I was ready to leave for a short, late, winter vacation with my husband that afternoon.  I had the day off from work, and Caytha had time while her children were in school all day.  It was a Thursday morning.   Caytha was going to run ten miles of my thirty-four mile run.
I would meet Caytha at the Ridgewood Duck Pond.  She’d drive there to meet me.  I’d be running to and from the Duck Pond, doing a couple laps through the surrounding towns that the parks meandered through, after running around the Ridgewood Duck Pond.  Then she was to arrive and do a ten mile loop with me, and afterwards I’d run home from the Duck Pond.
At about the seventh mile of running together; we were talking about men.  It always started with, “Why do they…?” or “How in the world…?”   Then I needed to take in a supplement and a drink from my hand-held water bottle.  I said, “I need to take in my supplement and some water at that bridge there.  My sugar is low.”
We arrived at the bridge, Caytha began jogging in place.  Me, that day, feeling dopey from the miles and exhausted from the thirty hours I’d worked on bodies over the last three days.  That, coupled along with the one hundred plus mile weeks I’d been putting in while still bartering for physical therapy on an ongoing problem with my lower back and right leg.  I was indeed feeling wiped-out, and wobbly.
I blurted out, “I know the answer…”  Caytha looked over at me as I devoured a chocolate supplement.  I held up my hand-held water bottle to the sky and looked upward with a smirk, and announced, “Women hold grudges.  Men just ejaculate them.”
It was then that Caytha began to call me “The Monk”…  You just never knew what I was going to say.  I never thought about it, because I’d been running so many miles alone; many times with no human being to speak to.  It was as if I had to get brave to tell anyone what was actually on my mind.
Over those years Caytha cajoled me, “You really need to write a book on what goes through your mind when you run.”  At this point she had seen my writing, albeit in email form.  I thought, ‘I could never do what she does.  She’s talented.  She knows how to be social, I certainly don’t.  I love trees and she appears to be comfortable in a city atmosphere around tons of people.  While, I’d prefer to be alone, observing people and nature from afar.’