"The Running Room" (A Short Story...Non-Fiction) 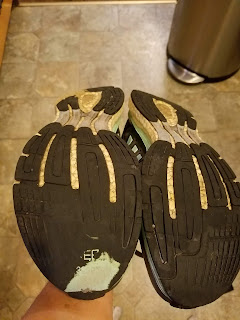 It was mid-December 1988 when I entered “The Running Room” shoe store.  I had just turned twenty-six two months earlier.  I brought three years of running logbooks with me.  My hope was that the man who was in a New Jersey running magazine recently, was present in his shop.  The magazine article was an interview with this runner who’d won the New York City Marathon twice and place second in the Boston Marathon four times.  He now was coaching.
As I stood at the front counter a bit intimidated, not knowing if this guy would blow me off or welcome me.

He was finishing up with a customer.  “Hi,” he said, making eye contact.

I began, “Well I bought a pair of running shoes from you in March and uh, well I, uh saw the article on you in ‘New Jersey Running’ Magazine.  And saw that you coach.  I’ve been self-coached for over eight years.”

He responded, “Are those your logbooks?”  I nodded!

The article only spoke of him coaching men.  “You’ve trained like this on your own?”  He asked.  “Yes.”  I responded.

He, Tom Fleming spent the better part of two hours speaking with me and looking over my logbooks.  At the end of the visit, I knew Tom would take a chance and coach me.  He gave me a half mile interval workout to do and then told me to call him during the week afterwards.
For the better part of the next twelve years, Tom Fleming would be my coach and friend.  However, he himself would say on a few occasions that he “couldn’t figure” me out.  I was a bit of a mystery and I didn’t know it for quite some time.  There were few things I hid from him.  Until one day, I realized he couldn’t handle my reality let alone his own.
Tom was well-intentioned.  Yet I knew there was always something gnawing at him.   Many times he seemed fairly relaxed and happy.  However, after 1994, I noticed those times were less.  Much less.
I knew some of the things that disgruntled Tom.  However, they weren’t unusual.  Most people would have been tormented by them anyway, given the circumstances.  One I knew of I was losing Boston.  Getting second place at the Boston Marathon more than once is a tough pill to swallow for anyone.

Tom always said, “No one ever cares if you get second.  No one remembers anything but the first place winner.”  I wanted to believe he was wrong.  The way he said it, made it so final.  “Second place is no place.” To a degree hard, but true.  That’s why third place feels better than second place to me.  Now I get it.

Tom always instilled the old saying,  “Nice guys finish last.”  He liked my kindness on some level.  He appreciated kind people.  Yet he’d follow up with this.  “But they’ll never get anywhere.”  Implying not selfish enough to win a race.

I asked Tom if anger helped people’s performance.  He stated, “You’ve got to be happy to perform well.”  However, I knew in me, happiness and anger directed with positive intentions together, gave me my best performances.  Could they have been better?  Who knows.

The other item that seemed to disgruntle Tom was the 1980 Olympic Boycott by the US.  It was Tom’s only chance to go to the Olympics.  And the US decided to boycott the Olympics held in Russia.  Again, logically that would have been upsetting to anyone.  Anyone with half a brain.  Tom would say of that, “If you don’t go to the Olympics.  You’re not an Olympian.”

The next thing Tom would mention to me that truly bothered him was his father’s death around Thanksgiving 1983.  That was a blow to Tom.  Tom and his Dad had a great relationship.  His Dad was his coach, his mentor, his confidant.  I cannot imagine losing someone of that nature.  To me that would be like losing an arm.  Something you never get over.  It’s missing, it’s painful and it’s obvious.  There’s no way around it.

There were things that freaked Tome out about me.  I am a bit head-strong.  At the time, the first eight years through April 1997, I didn’t want anyone much less Tom to see me as weak.  And the ironic part was those years were the worst in my life.  The most tortured, the most tested, the nastiest.  And I almost couldn’t handle it.  The physical and psychological pain I dealt with appeared wicked.  However, the worst was the spiritual.  The spiritual pain I felt unprepared for.  The gnawing, the tearing.  I felt inside was incomprehensible.  To me, it was something that would drive somebody mad.  Many times, I felt that I would lose it all.  And worst of all, my soul.
Physical pain is nothing.  I write this now having experienced things of a physical nature I use to fear.  I don’t fear so much now here writing this at age forty-five.  Psychological pain is nasty, yet I’ve had so much of that again, it’s digestible.  I’ve seen so much, been through enough. I have learned to understand irrational thinking and behavior and accept it as part of the human condition.  Whether we like it or not.
Spiritual pain is a whole new world.  It’s the black hole.  It’s where things don’t appear to be able to be rectified in someway in this lifetime.  It may take another lifetime or two to fix.  Many people don’t see evil as real.  I know evil.  I’ve stood in a pile of it.  It exists and it goes with all the incomprehensible realities of life.  The well is deeper than we know.
There were times Tom and I’d be talking and you could see him struggle with a notion of evil existing.  Why?  My take on it was, Tom had a hell of a time grasping the knowledge of some form of a superior being that created all.  Deep down I think Tom misconstrued certain things in life.  Nothing’s permanent.  Bad things happen to good people and bad people.  It was tough for Tom to accept that.  Many times I would try to describe God’s mercy from a non-denominational view.  It still was difficult and uncomfortable for Tom to engage too long in such discussions.  I feel he felt deep down if he did, he may unearth his real feelings of disappointment.  And that may lead him to feel it would have broken him.