Excerpt from, "Not Exactly Don Juan...and The Liberated Woman"

May 21, 2018
Chapter Nineteen:   "The Smack Heard Round the World:
"...Eventually, as time passed his life began to improve.  He regained a relationship with his children, primarily his son.  The man got his I.Q. tested.  Which I hoped would happen for him.
A few years later, one night, after he'd had gone through a life-altering experience.  We were in the cage working ground together, now at Phil's new big gym, Asylum Fight Gym in Ramsey.
We were working on me passing his guard.  We were drilling it, over and over again.  Finally he says, 'I got my I.Q. checked'.
I respond, 'Really?!  What is it?'
He replied, 'Ahhhh.  I'm kind of smart.  My son is too.'  He expresses a bashful, awe shucks look on his face, and body language shows his reluctance.
I ask,  'Com'on. Tell me! I bet it is real high.'
He responds,  'Yeah, I guess 157 is.  My son's is higher.'  He smiles, as he shakes his head." 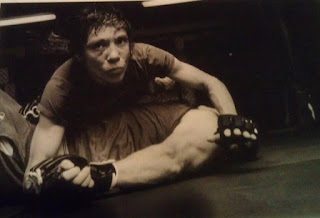