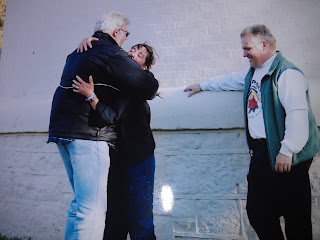 Picture:  Dr. Jim Manning. Jack Crilly and I at the end in front of the Cape May Lighthouse, April 2006.

"...Eventually, I convinced the right people to join me on this Run of New Jersey.... They would crew me.  With my husband, Norm Reicher, Dr. Jim Manning, Fran Gregoras, Sally Liang, Phil McCarthy, Jack Crilly, a number of runners from Central Jersey and Jack Crilly's twin seventeen year old daughters, I completed running the 212 mile course in fifty-five hours and forty nine minutes, which included one hour and forty nine minutes of sleep along the way...We raised over $20,000 for The Mary Therese Rose Fund...  The aforementioned crew reached God's perfection by believing in me and giving me a sense of belonging that will not be forgotten...And, I am grateful."